The day they captured an Enigma machine 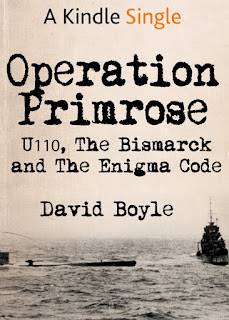 It was the morning of 9 May 1941 south of Iceland. The commander of U110, Fritz-Julius Lemp had fired four torpedoes into the convoy in quick succession.

There had been an audible explosion in the distance echoing through the icy sea, but there was also an immediate problem. The fourth torpedo had failed to leave the tube. Sea water had been pumped into the tube ready to fire, but it had failed to shoot out again with a burst of compressed air as it should have done. Consequently the submarine was now too heavy at the bows and Lemp began to lose control.

There was a short struggle to rebalance the trim and, when Lemp was finally satisfied and his crew breathed a sigh of relief, there was the warning throb of a warship coming straight towards them.

Lemp ordered U110 to dive and they could hear the terrifying and literally deafening roar of depth charges exploding all around them.

Silence at last. The crew looked for reassurance from Lemp, who was leaning theatrically against a periscope. “It’s OK,” he said. “We’re all going to be fine. You don’t think I’m going to let them catch me and shoot me, do you?”

It was a reference to the Athenia sinking eighteen months before, a Cunard liner sunk without warning on the first day of the war, and it was the kind of robust humour that was called for at this nervous moment.

Then the reports began coming into the control room. They weren’t good. The rudders were damaged. The batteries were giving off poisonous chlorine fumes, which they did in contact with water. The wheel that was used to blow the ballast tanks had come off. The depth meters had failed.

The engineer Hans-Joachim Eichelborn struggled quickly to fit new pressure gauges to the main cooling water pipes for the diesel engines, so he knew they were not actually sinking, but there was the noise of pressurised air escaping from somewhere. If they ever wanted to get to the surface, they would have to blow the tanks soon. The deciding factor was discovering that one of the propeller shafts had bent. It was clear they had no choice. They had to surface.

“We must wait and see what happens,” said Lemp quietly. “I want you all now to think of home, or something beautiful.”

It was a terrifying moment. The crew waited for the pressures on the hull to increase until it crushed them and the sea water rushed in as they sank to the depths of the Atlantic. Instead, there was a surprise. Suddenly, the boat was rocking. They must be on the surface after all. “Last stop!” shouted Lemp, like a bus conductor. “Everybody out!”

From the bridge of the destroyer Bulldog, they could see U110 on the surface dead ahead and the convoy commander Joe Baker-Cresswell ordered his engine room to increase speed to ram. As they got closer it was clear that the crew were on the deck and he put Bulldog’s engines into reverse to come alongside. Then there was a moment of indecision: were the crew actually clustering around the gun? Bulldog opened fire again with a machine gun until Baker-Cresswell confirmed that the crew were actually jumping into the water.

The scene on deck of U110 was almost as terrifying as it had been under water. Two warships were making fast towards them – the destroyers Bulldog and Broadway – and they were shooting. Shells and bullets were flying overhead. The journalist on board, Helmut Ecke, wrote later that he saw a man’s head blown to pieces next to him. He leapt into the water forgetting that his lifejacket had not yet been inflated.

Then came the crucial moment. The radio operator, Högel, climbed up the conning tower and asked Lemp if he should destroy the codebooks and Enigma machine. “The U-boat is sinking!” shouted Lemp. He went back inside to get the codebooks, but remembered his own notebooks and poetry for his girlfriend and got them instead.

Lemp and his first lieutenant, Dietrich Loewe, made sure than the vents had been opened and jumped into the sea themselves, the last to leave. It was only when they were halfway between U110 and Bulldog that it became clear that something was not right. The submarine was not actually sinking after all, at least not nearly so fast. Lemp shouted that they should go back, but a wave swept Loewe away and instead he made for Bulldog.

On board Bulldog, the same thought was also dawning on Baker-Cresswell – the U-boat next to him was not actually sinking. “By God!” he said on Bulldog’s bridge. “We'll do a Magdeburg!" Magdeburg had been a German cruiser, captured by the Russians in 1914 with codebooks intact. It was an enticing prospect.

Could they reach the submarine before it sank and take possession of the Enigma machine along with the codebooks with it? Could they change the balance of the Battle of the Atlantic?

Find out in my new ebook Operation Primrose: U110, the Bismarck and the Enigma Code, a companion e-volume to my book about Alan Turing – attempting to set the Enigma breakthrough into some kind of context (and it only costs £1.99!)