Farron is stronger with his faith than without it 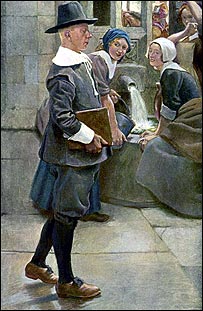 There is a kind of boneheaded Englishness, usually but not always Conservative, that believes someone's faith makes them a potential enemy within - that they somehow can't help being committed to other nations or ethics or moralities. That they are therefore not quite 'one of us', at least not to be trusted with political office.

It tends to go along with another English peculiarity, a strange and basically ignorant belief that the teachings of the Christian faith are mainly about homosexuality.

Actually, the condemnation of homosexuality is so central to Christianity that Jesus doesn't mention it once in any of the gospels.

Through the centuries, the English have returned over and over again to these themes. For some time it was felt that Roman Catholics must have their basic allegiance elsewhere - to the king of Spain, the Pope or some combination of the two.

Then, in the twentieth century, similar things were said about Jews: they must - or so it was said - owe their basic allegiance to the state of Israel.

These days, you usually hear this kind of nonsense spouted by crusty English establishment types about Muslims. Or by Guardian-reading 'evidence-based' types about people who describe themselves as Christians - again, the whole implication is that there must be some tyrannical hidden agenda, some secret allegiance elsewhere.

Tim Farron, the new Lib Dem leader, had to face this line of questioning over and over again from the media during his first weekend in office, and did so with his dignity intact. And I, for one, respect him enormously for it.

It is true that there are strands of illiberal socialism and conservatism which see no distinction between morality and policy. Who only have to disapprove of something to want to legislate against it (or, in the case of Tony Blair, to bomb it).  Liberals, it seems to me, are able to distinguish relatively easily between morality and public policy.  Not just their own conscience, but there is a difference between objective morality and policy too.  If we start trying to legislate against everything we believe is wrong, we will live in a tyranny.

When Bill Clinton famously closed down the abortion issue in 1992 in the US presidential election, he said he wanted it to be "legal, safe and rare", but did he get cross-questioned about why he wasn't urging more abortions? No, but I fear he would have done in the UK, where religious faith remains a source of suspicion - just as it did back in the days of the Tudors.

Why is this an English obsession? It is true that I may think this because my book How to be English is published this week and I find myself obsessed with the topic. But actually, I think there is a connection - there is a streak of puritanism which runs deep in these islands.

I don't mean puritanism as purely religious. English puritanism remains a kind of extreme protestantism, but it has moved its position since those days.  Once they used to smash stained glass windows or cut down maypoles and close theatres. These days, they rage at against anyone who believes anything beyond what can be verified by five senses - worse, it is their five senses that has to do the verification. This is puritanism reborn as a kind of narrow positivism.

Yes, my understanding of Dawkins is that he is an extreme protestant, so disapproving of spirituality that he has become an atheist. It is the logical conclusion of puritanism, in my humble opinion. It is the latest manifestation of the traditional English fear of priestcraft and mumbo-jumbo.

The kind of narrow empiricism it is based on is another seventeenth century idea, and it is getting a little frayed.  But I expect it will live on here long after it has bitten the dust everywhere else.

I am personally glad that the Lib Dems are led by someone who has some spiritual belief, some sense that this isn't all there is.  And since 77 per cent in the UK describe themselves as ‘religious’, it makes sense for aspiring political leaders to share some idea of what they mean.

Certainly, if there is a future for the left in the UK, we are not going to find it by withdrawing into a small cult of puritans, disapproving of everyone's spiritual beliefs and congratulating ourselves for being so 'evidence-based'.

Firstly, as an agnostic I have no qualms at all with Tim Farron's religiosity and will probably be voting for him when the time comes. I should point out, he's no more religious than Mr Gladstone, and no one can deny his achieevements for Britain.

I think that personally Richard Dawkins does more harm than good. But I should express the fact that numerically speaking most atheists aren't white, middle-class men, they are in the developing world and living in terror of being killed for their "infidelity" and "apostasy". The rights of people to belief or unbelief must be protected, and it's my belief that Tim would grant me those rights.

If he doesn't personally approve of homosexuality, I have no qualms about that. Admittedly I'm not gay and a bullied 15 year old might think diferently, but I'm sure Tim is opposed to bullying and discrimination and we are not here to make windows into men's souls so long as they obey the law and enforce it fairly if in power.

I’m sure Tim wouldn’t say that sins (as he defines them) equate to crimes, or should. There’s no law against heterosexual sex outside marriage, or adultery, or divorce, which Jesus did condemn (and is widely ignored by evangelicals, but not Catholics).

“He saith unto them, Moses because of the hardness of your hearts suffered you to put away your wives: but from the beginning it was not so. And I say unto you, Whosoever shall put away his wife, except it be for fornication, and shall marry another, committeth adultery: and whoso marrieth her which is put away doth commit adultery.”

Yet no one, certainly not Farron, calls for the law to enforce this (though they did in Victorian days).