Will the next PM come from outside mainstream politics? 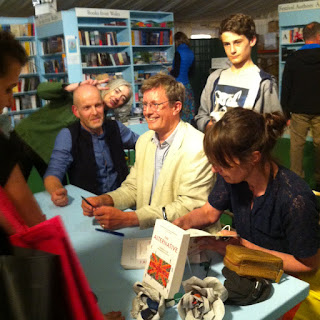 I found myself speaking at a New Weather Institute event at the Hay festival last weekend, about the prospects for a ‘progressive alliance’.

Despite the selfless and public-spirited behaviour, mainly of Green candidates standing down in some constituencies for the general election, I would say that the prospects were not terribly good.

I said so. But speaking alongside two inspirational people, Amelia Womack, Green deputy leader, and Zoe Williams of the Guardian, I had what I felt at the time was a sudden change of heart. Not so much about the prospects for a progressive alliance but about the future of the party system in the UK.

I belong to one of the parties – most people who know me will know which one – and I intend to stay an active member. But equally, that doesn’t mean I am unaware how political parties stifle debate, frustrate new thinking and do so with the combined membership of the size of the circulation of a medium-sized newsstand magazine.

It doesn’t mean I have forgotten how the parties encourage the most vacuous tribalism that prevents progress on so many issues – simply on the basis of ‘not invented here’.

It doesn’t mean I don’t remember the miserable local party AGMs, with their bourbon biscuits and their faint whiff of day centres about them.

We are about due for a major shift of political and economic mainstream thinking, which we get pretty regularly every 40 years (1979, 1940, 1906, 1868, 1832…). But the party system has managed to prevent the new ideas emerging being ready waiting in the wings.

It struck me that the victors of presidential elections in the USA and France have been people from outside the political system – and I see no reason why the same should not happen here, though it is clearly more difficult to break in and out in the UK. It maybe that, like Farage in the UK and Grillo in Italy, they will have to remain unelected to start with – at least from parliament.

The issue in questions was whether or not the progressive alliance needs a big idea. I very much believe that it does. I don’t think adequate funding of schools, shifting the budget about to pay more to the NHS, is by any means enough to drive a new political movement. That is about budget headings and little more.

But I think we can say the following:

2. It will have at its heart an economic idea that will make prosperity possible on a broader basis than now.

3. It will be based on an approach that maximises independence, self-determination and diversity (because that taps into the spirit of the age) – but understands how to mould that into a powerful force for change.

Subscribe to this blog on email; send me a message with the word blogsubscribe to dcboyle@gmail.com. When you want to stop, you can email me the word unsubscribe.
Posted by David Boyle at 17:32