What Parkinson's Law tells us about the general election 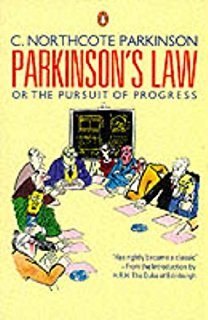 The exhausting general election campaign confirms what was in effect Parkinson’s Third Law.

His more famous first law is known by almost everybody – that the things that need doing expand to fill the time available. This is actually one of the great truths of life, but his third law is vital too. It is that the time spent discussing things is in inverse proportion to its importance.

C. Northcote Parkinson himself was a historian and he illustrated the law by reference to a committee meeting with three items on the agenda – new coffee cups, a new bike shed and a new nuclear power station. The power station went through on the nod because nobody dared reveal their ignorance, but everyone had suggestions about how to save money on new cups.

The same is of course true, though in slightly different ways, about the election campaign. Minor irrelevances loom large but the prospect of dropping out of European trade relationships and future economic policy barely gets a mention – certainly not from the Prime Minister.

This is not just depressing, it is deeply undemocratic. In various ways I've been doing our limited bit to get the important things discussed. Like last year’s Radix paper on quantitative easing and its major role in driving inequality.

We ended the paper by breaking the unspoken rule in UK policy discussions – we talked about the Great Unmentionable: where money comes from and whether there might be better ways of arranging things.

This was a subject that had finally been broached by the Bank of England, who explained how most money is produced by private banks in the form of loans – something that most commentators knew but preferred not to say.

Well, the Great Unmentionable has finally been mentioned again, this time in a report by the Bundesbank, which confirms the same thing. It also gives a sideswipe at the main radical alternative proposal, Irving Fisher’s so-called 100% Money solution, the previous idea favoured by the Chicago School before it fell under the influence of Milton Friedman in the 1950s.

Now it is beyond our remit, and our knowledge, to say which is right. What is important is that, finally – and in the midst of the most frivolous and infuriating election campaign in the UK – these vitally important issues are being openly debated. It’s just that they are not being debated here…