People who build walls get forgotten or derided by history 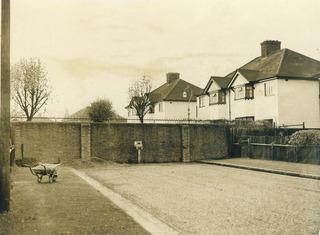 When I was a reporter in Oxford, I discovered a file of photos - in the Oxford & County Newspapers amazing press library - of the old Cutteslowe Wall. It was built in 1934 to divide a private estate from the public one. It was two metres high and had spikes along the top.

It was a living symbol of snobbery and how the rich derided the poor, and how the powerful feared the powerless.

It became a focus for idealistic protest and was pulled down twice by the city council, for the last time in 1959. When I was there in the 1980s, the bus route still failed to recognise that the wall wasn't there any more.

I thought about it over the weekend, as the world woke up to the fact that the new American president really does want to mark his border with Mexico with a wall, and realised that - with the possible exception of Hadrian - the builders of walls are derided or forgotten by history. What gets remembered is the moment they are removed.

Trump is a symbol of the decline of the West, but - if he builds the wall - it will come to symbolise his presidency in a very specific way.

I've been wondering these last few months what tactics we should pursue against walls, whether they are Brexit walls or those built by Trump. The tactics must depend on how we found ourselves in this situation.

Here is my take on it. First, it was the fault of the free market right, for the hands-off cult. What started as an important recognition of the power of market forces became, instead, an insidious loss of belief in any kind of action at all.

Their Panglossian view of the world leeched them of a belief in government. We elected them and they became powerless custodians of the nation.

That was the father of Trump. The mother came from the left, on the back foot for the past half century, and with their very own brand of powerlessness. Instead of ideas for the future, they gave us conspiracy theories, symbolic gestures, politically correct linguistics. It was in its way another catastrophic loss of belief in their own potential - endlessly trying to emphasise the present (Blair) or remake the past (Corbyn).

Instead of opposition, they gave us 'protest', which simply acted out their own powerlessness to do anything but supplicate.

It follows that the path we liberal-minded people should follow, it seems to me, is to recognise that we need a better vision - which means no more defending the past, no more defending defunct institutions. It means looking beyond the European Union - so that we are not defending the empty symbolism of tolerance, but we promote what is most important and we reinvent these institutions most likely to make tolerance and progress real.

This is not a plea for compromise, though it may look like that. Though it is a plea for strategic withdrawal on some issues - it seems insane to me that, in a nation of pushing 70 million people, we can't recruit and train our own to populate the NHS.

It is a plea for thinking afresh, so that we can challenge Trump and Farage, and the other brutes, on the future and win. And it seems to me that we most urgently need to rethink free trade so that it becomes a genuine tool of challenging enterprise and not a hidden force for plutocracy.

I think I once heard rumours of one in China too

Oh, and the builders of the walls of Mdina, if you've ever been to Malta. They are quite well-regarded, due to the events of 1565.

Actually if you think about it there's quite a few instances of famous walls doing what they were meant to do.

Constantinople, of course. It fell eventually, but damn if those walls didn't hold out a long time and do their builders credit.

As to walls, D Trump's promise is purely gesture politics: "everybody" knows that the only way to stop illegal immigration is to stop businesses from hiring them, not pretending to stop immigrants from arriving. There are many fewer businesses than immigrants, and by and large businesses need to have a fixed location where they can be easily found, so it is quite easy to stop them from hiring illegal immigrants.
Because illegal immigrants are not spies that come in with briefcases full of cash and have to be stopped at the border before they vanish: they come in because they expect to find jobs with profit-oriented businesses.

«it seems insane to me that, in a nation of pushing 70 million people, we can't recruit and train our own to populate the NHS.»

In the 1970s onwards millions of people lost jobs in various industries, and millions of new jobs were created in retail finance (estate agents, mortgage salesmen, ...) and in shops, bars, etc.

If not millions, many could have been trained instead as medical professionals, but successive New Labour and Conservative governments restricted as much as possible, by various means, places in medical related courses, while encouraging, by various means, training in "whatever" subject.

In part to keep medical wages up, but the bigger problem is that training in medical subjects is expensive, and the governments did not want to spend more tax money on training, relying instead on the ample supply of ready-trained doctors and nurses from other countries that had trained them with their own taxes.
As to nurses, various governments even encouraged mass redundancies of full-time UK nurses to be replaced with agency nurses, many of which are much cheaper immigrants.

Governments of the past few decades know very well that "aspirational" affluent rentier voters demand both low taxes and generous public services for themselves (but not for "scroungers", which is everybody on a lower income than them), and have helped satisfy that demand by cutting training costs and wages thanks to boosting immigration of cheap already-trained workers.

flipchartfairytales.wordpress.com/2016/08/17/are-we-prepared-for-post-polish-britain/#comment-26614
«Anecdotally, in my manufacturing business, we are under no pressure to give any pay rises and have not been so since 2008. We can get as many [overseas] skilled workers as we need within a few days via agencies, though sadly and inevitably, we’ve seen the total collapse of apprenticeships, the local college has closed its vocational courses and the industry training boards have all closed too. Since we no longer train anyone, its axiomatic that we now rely on immigrants to fill factory floor positions.»