A DIY guide to the No-Trains?-No-Show! passenger strike 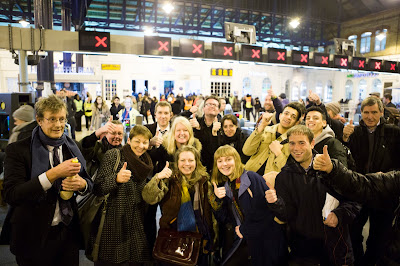 "We are the people of England,
that never have spoken yet..."
G. K. Chesterton, 'The Secret People'

"It looks as though The Revolution has started in Sussex and @davidboyle1958 is leading it," said a tweet on Thursday after my description of the first #passengerstrike event at Brighton. The tweet was by my friend Jonathan Calder, who is an extraordinary humourist - and the ironies are obvious.

It isn't so much that I'm not a very revolutionary person - though I'm not - but the idea of The Revolution, or any revolution actually, happening in deeply English Sussex seems unexpected enough to raise a smile.

I can vouch for it. As I walked down the packed train on its way to the confrontation with Southern Rail, I asked everyone if they would join me at the barriers and refuse to show their ticket - and have some cake at the same time.

A surprising number of them said they would, even if just for a little while, and so many of them behaved in the same way that I've come to believe it is what the English do when they are at the end of their tether. They didn't look me in the face when I asked them, having read my explanatory letter. They just gave a little nod, barely perceptible.

I know what that little nod means. It means they are not given to anger, and are embarrassed about showing it - but they recognise, as I do, that something must now be done. It was a nod of determination, which ministers ignore at their peril. And there they were next to me a little while later, as good as their word, for the party by the gates.

The article I wrote about it does seem to have had an impact. It was published mid-afternoon on Thursday and I was still getting tweets and retweets at the rate of about one a minute well into that night. That doesn't count all the 3,500 people who shared the article separately.

It struck a chord and so many people have got in touch to say they want to do something similar and asking for the letter. This blog isn't encouragement to do so - but, if they do, I do have some advice and an updated version of the letter I used.

There was some hilarity when I suggested that the No-Trains?-No-Show! event borrowed something from Gandhi, but Gandhi understood that this kind of action was - by striking at the symbols of their power (their ability to check the tickets they have failed so miserably to fulfil) - a way of reasserting our own dignity.

For Gandhi, it was making salt; for us it is tickets. When, together, we refuse to show our tickets, we force Southern either to appear ridiculous by opening the gates or to show aggression to the passengers they pretend to support. Either way, we win.

It is, I hope, a model for how to campaign against the arbitrary power of monopolies more generally. And please note, this is not a protest. In a traditional protest - with slogans and demands - you simply become supplicants; you act out your own powerlessness. By refusing to make ourselves easy to process, we are reasserting our power.

Traditional protest, with all its defunct symbolism of the Russian revolution, has served us badly recently. We need something else if we are not going to be completely pushed around - as we are being by all sides in the Southern Rail mess.

By doing it politely and without shouting, and with party hats and cake, we are doing it in a way that we reserved English can take part in.

That's the theory. A few bits of advice:

1. Don't do it alone: it takes some courage to get up and give letters to people on a crowded train.

2. Do it when people are most likely to be able to help - probably not in the mornings on their way to work.

3. Be charming and understanding, not just to people who are too busy to stop, but to the poor ticket collectors caught in the middle. Tell the manager to open the gates.

4. Don't fall into the usual trap: you're not holding a protest; you're waiting to get through the gates and will disperse as soon as they are opened for you. But you're not going to show your ticket to Southern or use their machines until they can run a railway again.

5. Stay resolutely non-aligned as far as the sides of the industrial dispute go. The whole purpose is to carve out a voice for the passengers again.

In the meantime, here is an updated version of the letter I used:

Please join me for a 'No Trains? No Show!' event at the barrier - with cake!
Like you, I’m a regular user of GTR services (Southern, Thameslink etc) and – like you, also, I expect – I have now reached the end of my tether.

I’m a [INSERT PROFESSION/HOME TOWN ETC]. I live in West Sussex and have XX children. I need trains just like anyone else. But I’m not any more prepared to submit my ticket (which I’ve bought) to the company for inspection, when they have manifestly failed to provide me with an adequate or reliable service, now for eight months.

I’ve been wondering what Gandhi would do in these circumstances. I have come to the conclusion that he would join with others and refuse to show his ticket at the barrier at [INSERT STATION].

So I’m inviting you to join me at the barrier tonight, where we will refuse to show our tickets. We’ll do so politely, demanding to see the manager to open the gates for us – on the grounds that they are not keeping to their side of the contract. We will also have cake to celebrate our revival of the Blitz spirit in the face of such official indifference.

If the gates are open already, we will claim victory and try again another day. If they stay shut, we will have proved the company's aggressive attitude to their passengers and made a stand. Either way, we win!

If you’re too busy or you just want to get home, we quite understand. Please give us a thumbs-up 👍. But if you can even spare a few minutes, it would be an enormous help. In the meantime, I’ll come through the train in a moment and see what you think, and collect this copy (I want to use it again!). If you join us, I’d be ever so grateful: this will be a very civilised and good-humoured event. It will only work if it is fun!

Thank you so much for your time.

[SIGNED BY WHOEVER IS INVOLVED]

It may be sensible to reprint a copy of the Guardian article on the back of this letter, so that our smiling faces can reassure them that this will be a thoroughly restrained, English and therefore effective event.


See my book Cancelled! on the Southern Railways disaster, now on sale for £1.99 (10p goes to Railway Benefit Fund).
Subscribe to this blog on email; send me a message with the word blogsubscribe to dcboyle@gmail.com. When you want to stop, you can email me the word unsubscribe.
Posted by David Boyle at 09:11

A minor tip to add to yours: if you are doing cake, offer it to the ticket collectors. It's a great way to set up rapport.

Should it come to it, I would hope the police would take a fairly dim view of Southern in this situation, rather than the passengers. Especially if they're familiar with Peel's principles of policing – https://en.wikipedia.org/wiki/Peelian_principles

Thanks for the tip, Rob. We did exactly that the first time we did this - you're absolutely right...

My train journey yesterday (Jan 24th), not a strike day.

Being wheelchair disabled, I have to book my journey in advance, though I don't know why I bother when the promised "assistance" never materialises.

I was told my usual train into Brighton was cancelled, so I was booked on the next one, just seven minutes later. No problem. I'd still get my connection, or so I thought.

Arriving at the station in good time, I found the "cancelled" train wasn't cancelled after all, but as usual there was nobody there to get me on the train, so the guard had to do it.

Arriving at Brighton, I was informed that my next train, the Diesel to Ashford, was cancelled because it ran out of fuel!

You couldn't make it up!

I was put on the slow train to Ore after an additional twenty minute wait, only to be informed that this one was "probably" terminating at Eastbourne because of a broken conductor rail somewhere beyond.

There was nobody to get me off the train, and the guard hurried away to try to find out what was happening, so I had to lean out of the door and try to attract someone's attention or I may have ended up anywhere or nowhere.

What a way to run a railway! Diesel trains running out of fuel, poor maintenance of trains and infrastructure, or more likely none at all, broken rails, booked "assistance" seldom materialising due to non-existent platform staff, and on the rare occasions when there is somebody to meet me at the station, they're agency staff who are neither trained nor authorised to deploy the ramps, so there's no point having them there.

What are all those weekend line closures about if there's no maintenance being carried out?

The few remaining station staff couldn't be more helpful, and that goes for the few remaining guards on the trains, but if I had any other options I'd never choose to travel by train.

I can't say any more without resorting to obscenities because I'm so angry and disgusted with Southern's (mis)management and the attitude of their accomplices in government, but I'm sure my fellow commuters won't have forgotten what we've been made to endure when the next elections come round.

Barmey, could you get in touch via dcboyle@gmail.com? Thanks so much... I don't think I have an email for you.