How Gandhi could win this for rail passengers: a proposition 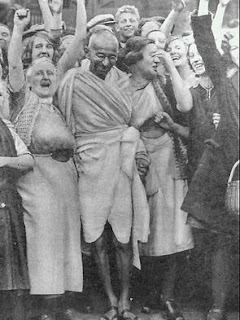 A few days after Christmas, I climbed with my family up to the old motte and bailey castle that
crowns Truleigh Hill on the South Downs. On the one side you can see the English Channel; to the north, there is Sussex laid out before you.

But what was that black scar in the sky going from south to north, I asked myself? Then I realised. It was the M23, the motorway route from Brighton to London. A great, oily streak across the clear air.

I had a slightly sanctimonious email just before Christmas, asking me why I have spent so much time blogging about unimportant issues like Southern Rail when there are people actually dying in Syria. This is of course quite true, and it did bother me - but the black cloud across Sussex made me think again.

It is true that Southern Rail are not actually bombing anyone. It isn't systematically murdering families. But the crisis is causing the breakdown of the systems we use to make getting from place to place bearable and as little polluting as possible. Because Southern has a dysfunctional contract, and because their owners Go Ahead do nothing to fulfil their duties beyond it, the air we breathe becomes as intolerable as the journeys we make.

But there is another reason I am concerned about it - though not to the exclusion of everything else, as I hope to show later in the year - and you only have to see the results of the Association of British Commuters passenger survey to get a hint of it.

I find it both extraordinary and disturbing that we put up with what we do. We pay through the nose to travel with Southern, and more than that before 9.30am, though they have not been capable of getting us there reliably now since April. They may bundle us on and off trains. They may abandon us in the middle of the night at a station miles from home. They may let us miss meetings, school pickups, flights, interviews and dates - and our families - with complete impunity. Yet we still obediently pay up and hand over our tickets.

Maybe that doesn't matter in itself. It isn't Syria, after all - but if they can do that to us, what else might they do?

We all have our lists, but mine would include closing the post office services vital for our local economies and promised us when they closed the bank branches. Or undermining our attempts to be more financially independent by taxing solar panel (both of these now seem to be happening). Or a range of other ways in which ministers peddle untruths or take us for granted or simply wash their hands of us, during the tortuous Brexit negotiations to come.

And all because they find they can mess us around on the trains and we stay obediently pliable.

So I've been asking myself what I think is a pretty important question. What would Gandhi do?

And you only have to articulate this for the answer to be obvious. Gandhi would refuse to show his ticket. He wouldn't bother to have a fight with a guard about it. He would get together with 200 or so others and refuse to show tickets - not at any of the small stations where the gates are usually left open these days - but at Brighton.

He would buy a ticket - this is civil disobedience not illegality - but he would refuse to show it, along with everyone else, at the gates at Brighton Station at 6pm and clog the arteries until they open the gates and let him through. He would film the event, knowing the embarrassment it would cause in either eventuality - either opening or keeping the gates closed would cause political pressure to mount.

By doing this he would shift the narrative away from the one the government wants - that this is just about industrial action - and put the attention right back where it belongs: on the plight of the passengers these last eight months or so, on the incompetence of the train company, the failures of its owners and the duplicity of the Department of Transport, where it belongs. It would give us passengers back some dignity again.

I had felt it was unfair to put the guards under this kind of pressure - they are courageous people who have stuck by the passengers during the worst chaos in the summer. But the industrial action has made me think again about this. Let's see which side the unions are actually on, when we ask them to open the gates.

Yes, I understand that the people manning the gates at Brighton are not members either of Aslef or the RMT, though some of them will be. They are mainly agency staff and security guards. But the managers will soon be on the scene if enough passengers are explaining that they can't show their tickets because the operator has failed to fulfil the contract between them - and if enough can spend a few hours putting pressure on outside the gates by persuading others to do the same.

I would be up for that. It seems unlikely that Southern will lose their nerve like the British in India and start arresting us - we should be so lucky - but the longer they hold out, the more uncomfortable it is for them and the more this tactic will work. It works whether they open the gates or keep them closed.

I'd like to start the ball rolling by getting together with anyone who wants to talk about this at the end of Platform 4 on Wed 11 Jan. I will be on the Thameslink that arrives at 1743 in Brighton (the last train of the day). It is a full strike day so there may be nobody around - in which case I will go off and have a drink and try again another day.

But the beauty of this tactic is that anybody can lead it. They can hand out letters in the Brighton-bound train explaining that they will be refusing to show tickets at the barriers and asking others to join them for an hour or so. If they do so, just a few guidelines:

DO be polite and peaceful: that's how we win.

DON'T browbeat the security staff - ask for the manager and demand to be let through. There's no point in getting through by accident.

DO film the conversations and post them on social media.

DON'T browbeat other commuters. Lots of people will be busy and that's fair enough.

DON'T take sides - as far as this action is concerned, the government, management, owners and unions are all in it together, even if they are bound by common bonds of frustration and hate.

DO be careful. We will not be breaking any laws, except for the railway byelaw which says we have to show our tickets on demand. It makes sense therefore not to do this alone.

DO bring a thermos. It's got to be fun!

I suggest that the hashtag #passengerstrike. I also hope the process can drag a little self-esteem back from the jaws of Southern Rail. Goodness knows, we need it.

Hi David - I liked this. Good luck with it. My understanding of Gandhi is that he would also be open to not buying a ticket too - in some circumstances. After all in some of his activities he clearly stepped into illegality - in order to draw attention to how unfair the law was. What he did do is always take the consequences (prison) without complaint - again to highlight the ludicrous and unfair nature of the law he was protesting against. So, in my mind both actions would be viable in this instance - buying a ticket and refusing to show it and choosing not to buy a ticket - in protest at the current structures that you describe so well - fleecing passengers with no accountability for train providers. As you also say - each step would have to be peaceful, respectful, clear as to the motifs etc (i.e. not a dodgy excuse to save £). And people would indeed need to be open to whatever consequences followed within the current set up. Imagine long time commuters being fined or worse for not paying for a service that is basically collapsing - that too would be intereseting

Possibly a good idea, though not so good when fellow passengers cannot get through the barriers.

This assumes barriers manned, rather than automated barriers, through which one has to present ones ticket.

Prior to change of ownership of Southern there was not a problem.

Southern should be taken into public ownership. No, not re-nationalisation, an open coop, where staff, passengers and government has a stake.

There should be a clause, provide poor service, automatically lose the franchise.

For others, wait until franchise expires.

Guards have an important role on trains. They are responsible for safety. A role enshrined in railway legislation. They can pull a train out of service. It reassures passengers a guard on the train, they can check tickets.

No, we should not get rid of guards.

Unions have to more imaginative. A strike is Old School. It hurts the passengers losing public goodwill, plays into the hands of the government.

How about not collect fares that day, open the barriers? That hits Southern, but does not harm passengers.