The best books are healing to read 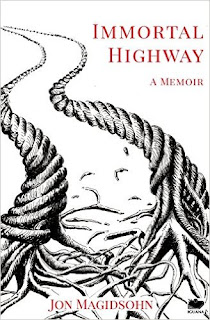 "The real voyage of discovery consists not in seeking new landscapes but in having new eyes." Not me, but Marcel Proust, and quoted in a magnificent book I've just been reading.

I should say at the outset that Immortal Highway is by a friend of mine, Jon Magidsohn. But I believe I would have found it as moving as I did whoever had written it. It is beautifully crafted, an astonishing memoir of recovery from grief.

Most of the book is taken up in a road trip he took with his nine-month-old son after his wife Sue died of breast cancer.  The story is tragic enough - Sue was diagnosed just after becoming pregnant, and decided to forego the normal treatment that should have saved her life until Myles had been born.  By which time it was, as it turned out, too late.

I remember reading recently that The Diary of Anne Frank had been banned in a library in Arizona by the local board on the grounds that it was "a bit of a downer". There are so many reasons why Immortal Highway could have been a bit of a downer, maybe it even should have been.

But it wasn't. perhaps because of its complete honesty, perhaps because it allows you to take your own life unawares a little, and perhaps because he so effectively tracks the journey spent finding a way back to life himself - it is actually one of the most uplifting books I have read.

When you read a book that gives you Proust's new eyes, it seems to me that you should record or it. So that's what I'm doing here. Jon Magidsohn has written a profoundly healing book and I recommend it.