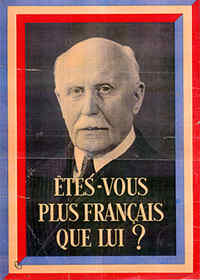 I notice there are epetitions going up trying to haul Tyson Fury over the coals for his politically incorrect statements. There are others going up demanding that we ban a complete buffoon from the country while he is standing for US president.

Meanwhile, under our very noses, a far more serious threat is emerging. The Front Nationale won nearly a third of the votes in the French local elections and topped the poll. There is a real prospect now that France will elect the far right as their government.

But, hey, maybe we should start an online petition against the very idea? I jest, of course. The left has particularly vulnerable to fiddling while Rome burns these days - just as Labour MPs spent hundreds of hours debating foxhunting in 2003 when they should have been holding Blair to account for the looming Iraq war.

It may of course be that France is particularly vulnerable to this kind of political takeover, but the Vichy regime was a response to the trauma of capitulation - and I'm not sure that Le Pen looks much like Petain (see picture).

But what I find most frustrating is the way the political class, in this country - and probably in France as well (not sure about that) - seem so unable to respond. Very few have been brave enough even to try to face down the far right, though Nick Clegg's debates with Farage were undoubtedly a courageous attempt.

This is a bit of a mystery. I'd like to suggest a reason.

It is because of the enormous gulf between the purpose of our public institutions and their actual effect on the ground.

The political class clings to our institutions - the welfare state, the European Union, the DWP, because they know what the purpose was behind them and they revere them for that. They believe that, if they are failing, they can be reformed and they stare eagerly at the data without realising that it is largely delusory.  Most target data is.

Those who are tempted by the far right see only the reality of these institutions, either because they deal with them and their pointless call centres and bullying nudge policies. Or because they are on the receiving end of what they see as their neglect (if there are negative sides to the influx of foreigners into the country, these are the people who feel it - in the neighbourhoods they knew as children).

Talk about this gulf to politicians in Westminster and most of them will stare at you blankly (or start an epetition against you).

But this isn't a hopeless prescription. It means that there is something we can do to head off the looming disaster of the far right taking control of a major European nation. We can undertake an urgent and systematic reform of our giant institutions, public and private, so that they are actually doing what they are designed to do - rather than generating outcome figures to make their political master think they are.

This is a major agenda to humanise institutions and make them effective. And to involve service users in the business of reforming and delivering services.

Only then could any national politician put their hand on their heart and say that we are, in any way, all in it together.

It’s Front National, masculin, like the bully Hitler-apologist that create it.

It’s 30% yes, but only 50% of people bothered to vote, so appealing were the various offerings.

The FN core white-catholic –supremacist, xenophobic and anti-Semitic, proud colonialist who hates anybody that is different and still believes Petain saved France has always been there. It’s an ugly French thing.

It gains in bad economic times, as a protest vote. We are used to useless politicians, corrupt, selfish, greedy, priapic but tolerate them in good times. Then when a crisis hits, we lose it and have a revolution.
The FN did a good campaign on the Nationalism front, basically France for the French. Their slogan are very appealing for the white working class that has been suffering since their jobs have been outsourced to globalisation and abandoned by the various parties who do not engage with them as they can’t tell them : the world is changing, your skills are obsolete, you are screwed, we have no solutions for you beside pacifying you with benefits so you can still buy stuff.

Once many would have voted Communist, they now vote FN, because it speaks to their fears and anxiety and offer simple solutions: France for the French, French food at school ( if you don’t eat pork, a vegetarian offer is not even on offer), out of the EU, and local jobs like in the good old days when France was a colonial power and you could call an island in the Pacific ocean France. Except, times have changed. No details on how the change is going to be implemented beside making life difficult for people they loathe. The new FN is trying to be mainstream, with "decent management", a horrifying prospect but it is happening.

France is a very conservative country, you must conform, submit, be a good little citizen, accept that mum and dad have in store for you, cause they know best.
Yet voting FN was once kept hush-hush because of shame. What has changed, in the past few years, is the acceptance of FN ideas by mainstream politics ( if you can’t beat them, steal their votes) and xenophobic intellectuals like Eric Zemmour ( France love intellectuals even when they talk from their rectal cavity) legitimising their disgusting and limiting thoughts by appearing on TV weekly – ( something that would not have been acceptable in the UK) .
I was in France election day, usual parties were in shock, yet people have voted and we live in a democracy. Mainstream parties should feel the slap they got as long as possible, and do some soul searching. I am not holding my breath.

Thanks so much. Really fascinating...

It's just my opinion, I can be wrong.

Fascinating - If you are into car crashes in slow motion, yes.

Forgot to mention that the Urban vs Rural plays a part in the growing of the FN in France as well. Rural had, beside agriculture, manufacturing and the peripheral business that goes with it. As things Made in France (with the exception of high-end luxury goods) slowly disappeared from the rural landscape, so have investments in infrastructure and transport, why should you invest if there are no jobs.
In the rural area where my family lives, if you don’t have a car, you are in trouble because communal transport is a long way away. One of my relative’s car failed and for 2 weeks he had to go back to the parental home because it is near a train station. His journey to work that takes roughly between 2 and 3 hours in his car, took 4. If you want to stay where your family has always lived in rural areas , have no money or low skills, you are in trouble, and feel abandoned by the powers who only see to care about big cities.

France has a very high consumption of anti-depressants for a reason.

Crisis delayed until the presidential election.

The 2 Female Le Pen FN candidate, are not a sign that France is becoming less macho - sexist, it’s just a symptom that the Piston ( the Froggie equivalent to it’s not what you know but who you know) still works. I am sure it still applies, but once when you had a useless child and not too bright , if you know anyone, you got him or her a state job, basically a job for life, and ignored the damage they inflicted.