Forty years on: don't let's go back there! 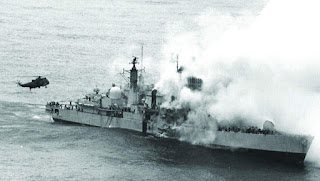 It feels a little exhausting to say so, but the invasion of the Falkland Isles took place exactly four decades ago on Saturday. Ah yes, I remember it well.

I was a junior reporter, a trainee, on the Oxford Star in those days. On that particular day (2 April 1982), I was heading for a weekend training course in Oxfordshire with other trainees and I remember picking up a hitchhiker on the Oxford bypass, who turned out to be a naval rating who had been unexpectedly ordered back to his ship.

It was my first indication that something was really happening.

I have two points I want to make about that time.

First, just how unusual war felt in those days. I did not remember any conflict – apart from Northern Ireland, of course – for my whole childhood (I was born two years after the Suez debacle). Harold Wilson had managed to keep us out of the Vietnam war. There had been British peacekeepers sent on to the island of Anguilla in 1966, but in the end the government sent London bobbies (the New York Times headlined the affair ‘The Lion that Miaowed’)!

These days, when we have endless military challenges, it is hard to remember what it felt like then to end a period of almost complete peace.

That was one reason why I was, at the age of 23 and newly obsessed with politics, so keen to dash back to my bedroom between lectures to listen in to the debate in the Commons – and it was strange to find only one of my colleagues seemed keen to discuss it (how are you, Candida?).

Looking back to that debate, it was amazing to remember how bellicose Michael Foot and the Labour opposition were in the immediate aftermath of invasion – perhaps because they smelled blood: the Thatcher government was desperately unpopular at that stage, and Foot may have believed that nothing could be done and that this would prove their final straw.

The second point I want to make was that the recovery of Margaret Thatcher’s reputation and the apparent success of her government can be dated pretty accurately to the moment that the destroyer HMS Sheffield was sunk by an Exocet missile (4 May).

I had been out canvassing for the Liberals that evening in south Oxford (for Victoria Mort) and I took a break – and, like everyone else – I saw the lugubrious Ministry of Defence spokesperson Ian Mcdonald announcing about the sinking.

Going out again afterwards. I found the mood had completely changed. Someone had even nailed a copy of the Labour election address to a telegraph poll and scrawled the word ‘TRAITOR’ across it.

Looking back, I have a feeling that was when the tide turned against the Liberal-SDP Alliance.

You can see the same difference with the fly-on-the-wall documentary Warship¸ two series of which I have been watching on My5 – which is upbeat, thrilling and a relaxed view of the navy, as the Duncan is involved in a missile strike on Syria after it used chemical weapons. Compare that to the 1976 series Sailor, an uptight, class-obsessed view of the oldest ship in the fleet, the Ark Royal – where Captain Gerard-Pearse is seen complaining that none of his instruments are working correctly.

It was the same distinction between the film Chariots of Fire (1981) and Lindsay Anderson’s last film Britannia Hospital (1982), with Leonard Rossiter playing a slightly cynical hospital manager trying to smuggle the Queen in through the picket lines outside.

Say what you like about the old ways of seeing the world, I definitely prefer Chariots of Fire, the unexpected success to the unexpected, and undeserved flop. It looked back beyond that feeling of exhausted cynicism that prevailed in Britannia Hospital – or in Ark Royal in Sailor or any other metaphors for the nation in the late 1970s.

For all my frustrations with the current state of the nation, I don’t want to go back there.

http://bit.ly/HowToBecomeAFreeanceWriter
Posted by David Boyle at 20:35