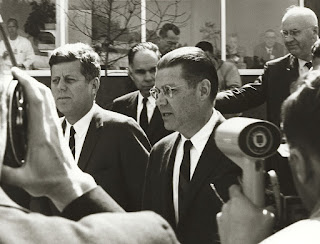 When I was writing my Tickbox book, I found myself researching the great American technocrat Robert McNamara,

Like many other people in deep thrall to Tickbox, McNamara was also pretty emotional. His career was characterised by extreme loyalty, not just to Kennedy, but for a time also to Lyndon Johnson, his successor. It was a passion that nearly sent him insane, but it also led to his egregious habit of quoting selective numbers in public to defend his president – even, as it turned out, as he turned against the Vietnam War.

Still, it was the calculating element of McNamara’s personality, not the romantic side, that first brought him into conflict with the US defence establishment as Kennedy’s Defense Secretary – and particularly with his old boss, the USAAF general Curtis LeMay.

As such, McNamara was next to Kennedy throughout the Cuban missile crisis in 1962, urging a blockade rather than the massive strike favoured by some of the top brass. The most implacable of his opponents was his old chief Curtis LeMay, now also reputed to be the original for the Peter Sellers film Dr Strangelove.

More helpfully, the US ambassador to Moscow Tommy Thompson was also there and urged Kennedy to reply directly to Khrushchev’s earlier, less aggressive message, where he promised to remove the missiles in return for a face-saving undertaking that the US would not invade Cuba. He worked out that Khrushchev needed a device to allow him to step back, and – as it turned out – he was right.

As McNamara tightened his grip over US defence policy, LeMay became increasingly implacable. He ended his career as running mate to the racist governor George Wallace in the 1968 presidential election. But that is beside the point.

The real point I am making here is about the importance of finding a face-saving formula. McNamara and Thompson realised this, and so did Kennedy.

The problem we have is that the situation in Ukraine is increasingly dangerous because both the British prime minister and the US president seem determined to ‘win’ the conflict there.

They are neither of them stupid, but the truth is that the Ukrainian war came as a godsend to both men. Johnson could grandstand and avoid the fallout from ‘partygate’…

What result are they really intending? That somehow the cavalry will sweep through and arrest Putin, bearing him off to the Hague and his personal war crimes prosecution?

That isn’t going to happen. Khrushchev did not long survive the Cuban crisis. He was removed from power by Kremlin insiders like Leonid Brezhnev, partly because of what had happened there. He was retired from 1964-71.

Putin may well need to be ousted, as Biden says, but – since we are not into regime change any more these days – then that can’t be our decision.

The Russians will have to do it. And only then – maybe – we might find a way to putting him and other war criminals behind bars.

I am not drawing parallels with Khrushchev. The Cuban Missile Crisis was nothing like the war in Ukraine. But we may still be heading for some kind of Cuban style stand-off.

That is the point when I am praying, for the sake of the world, that there is someone like McNamara or Thompson to put the case for a chink of hope, rather than just unthinking gung-ho voices like Biden and Johnson.

There can be no winners in these conflicts and, although the Ukrainians are at the moment pushing back the Russians – with huge skill and courage – I am not sure how long this will last.

And even if it does, we don’t want to push Putin into such a tight corner that he does something even stupider.

http://bit.ly/HowToBecomeAFreeanceWriter
Posted by David Boyle at 23:32