We may be more generous than we fear we are 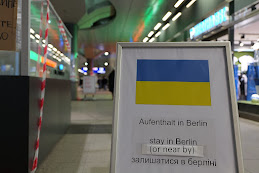 This first appeared on the RadixUK blog...

It is strange what a difference a few weeks make. As the refugees began to stream out of war-torn Ukraine, pouring into Poland and finding it hard to get to the UK, because of the usual, embarrassing bureaucratic barriers, many of us watched with comfort and shame – a mixture of the two – to watch BBC news film of the generous Germans crowding into Berlin railway station to offer their homes to desperate Ukrainian families.

It just went to show, something or other – we said to ourselves, fearing that it was just the Germans or just the continentals. If only we British could be a little more like that – or so we thought…

Fast forward a couple of weeks, to Michael Gove’s announcement about how we might do something similar, earning £350 a month by doing so – and we now all feel a little happier about it.

Then suddenly, 25,000 people had signed up for the refugee scheme within the first hour. OK, then there were more barriers to surmount…

But it demonstrated that the ordinary British were as hospitable as any other nation. It made us feel good about ourselves – which is tantamount to actually becoming better people (as Cressida Dick showed us back in 2017).

The implications are important. That when our political system is designed and interpreted by people who are more suspicious and nervous about people’s motives, then we will be too.

Nor is this just a problem about governments of the political right. Socialism seems in practice to encourage a kind of corrosive cynicism. In fact, both ends of the political spectrum are intolerable in different ways.

Instead, what we need to do is to share the business of government with people – a process known as co-production – because, as the late, great social innovator Edgar Cahn used to say, people have a fundamental need to feel useful.

Everyone does – not just those who are qualified to run public services. And I know from the experience of starting time banks, for example, that when you give people who have only been receiving care their whole lives the chance to give back, then you can transform their lives.

That seems to be to be an indication of what radical centrism might mean: it is the opposite of Home Office style tickbox suspicion and Leftist cynicism too.

http://bit.ly/HowToBecomeAFreeanceWriter
Posted by David Boyle at 14:33