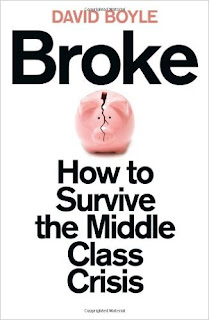 This post first popped up on the Radix blog...

The author Radical Middle, the campaigner Mark Satin, used the metaphor of roads and myopia to explain what he meant by the title. For Satin, it isn’t about a view from the right hand side of the road, or the left hand side. It is, he said, “a view of the whole road”.

That fearless clearsightedness suggests an end to the deliberate selection of evidence, which should perhaps be a central purpose of the radical centre project. Which might explain why I feel so enraged by the faulty assumptions behind the latest UK budget.

Let’s leave on one side for a moment how nurses improve their ‘productivity’, or why transport infrastructure should help the suburban poor in our cities (the Newcastle metro isn’t used to speed the city’s poorest to jobs in the car factories, the London overground or underground don’t seem to help the poor of Barking and Dagenham).

Just for now, let’s examine the big lie that everyone in the establishment seems to repeat – that high house prices are caused by too few homes. It can’t help, of course, but where is the evidence that it is the central cause? On the contrary, a glance at the graph of inexorable house price inflation shows the biggest leaps have all been when more mortgage money gets pumped in – when Geoffrey Howe abolished exchange controls in 1979, when Nigel Lawson ended MIRAS in 1987, when Gordon Brown encouraged buy-to-let mortgages early this century.

It is worrying that even the Treasury seems unable to recognise a classic case of too much money chasing too few goods. If we have to satisfy the building demands of every Far Eastern investor before we see any benefits from building more, then you can’t help feeling there may be a quicker way to tackle this urgent problem.

There are whole new estates along the Thames with no lights on, because they are owned by Singapore investors – whose money has fuelled another ratchet in the inflation of roofs over our heads in the UK. It is this discomfort which, I assume, has caused the official myopia.

I wrote about this first in my book Broke, which now seems more prescient for comfort. It was put coherently by the Stumbling and Mumbling blog last month.

It matters partly because, if we build more without tackling the fundamental problem, they ill just slip further out of reach of most of us. It also matters because the solutions in the budget – abolishing stamp duty for first time buyers – will push up price too. It is a classic Treasury fudge, trading off long-term pointlessness against a few positive headlines today.

They also matter politically. Because the middle classes will not sit back apathetically to watch their children priced out of the housing and rental market, unable to set up any kind of home in the neighbourhoods they were brought up in. These are dangerous times and, thanks to the myopia of the budget, getting more dangerous.

Get a free copy of my Brexit thriller on pdf when you sign up for the newsletter of The Real Press.
Subscribe to this blog on email; send me a message with the word blogsubscribe to dcboyle@gmail.com. When you want to stop, you can email me the word unsubscribe.