The choice before the Brexiteers: open society or Chinese-style capitalism? 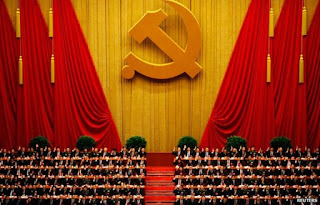 This blog first aired itself on the Radix blog site...

It’s a funny thing, but Michael Gove’s defence of Boris Johnson, following his damaging confusion about a British woman detained on holiday in Iran, gave me a real shiver of apprehension.

It wasn’t just the lazy way Gove was apparently prepared to undermine the slim chances Nazanin Ratcliffe has for release – by implying there was some doubt about why she was in Iran (visiting her parents), when there is none. Nor was it simply the way the Brexit establishment shoves aside vulnerable people if it helps their political chances. No, it was also something to do with the philosophy of Karl Popper.

Popper, as I may have mentioned before, seems to me to be the key to any kind of radical centre ground in politics. It was Popper who explained the sheer inefficiency of dictatorship, writing in England as a refugee from the Nazis.

Popper came up with an interim answer to the problem David Hume had set two centuries before. You can’t prove that all swans are white no matter how many white swans you see. But you can disprove it – if you see a black swan.

Popper’s philosophy of science implied that societies, governments, bureaucracies and companies need to make this falsification easier. Because they work best when the beliefs and maxims of those at the top can be challenged and disproved by those below. That’s how we learn. Closed systems discourage learning – openness encourages it. That’s why Popper said that open societies are the one guarantee of good and effective government.

It means that people on the front line will always know better about their own lives or their own work than those at the top. The more open you are to them, the flatter the hierarchy, the more the challenging information is available to move forward.

Popper’s open society idea is simultaneously the only possible justification for Brexit and an explanation for why the highly centralised structure of the UK is not designed for a post-Brexit world. The Brexit government represents the very opposite of the central idea of the Brexiteers, a kind of languid sense of entitlement to absolute power.

So here is why Gove and Johnson’s behaviour matters. Because there are two models of market-orientated trade – the western and the Chinese. For a long time, we assumed that Chinese capitalism would be vulnerable because of the open society factor – they would not learn as fast as we do. For a long time, liberals assumed that democracy and open markets necessarily belonged together.

But now, with Chinese-style authoritarian capitalism – which tends towards enslaving their own people – on the march, we have to ask which way the Brexiteers in government intend to jump. Will they go with Popper’s open society as the basis of a learning market, or will they opt for authoritarian capitalism – which is happy to lazily sacrifice individuals and consumers just so they can prove themselves right?

Will individual rights matter in Brexit Britain – or are we to be sacrificed on the altar of Gove’s and Johnson’s quest for some kind of justification?

Subscribe to this blog on email; send me a message with the word blogsubscribe to dcboyle@gmail.com. When you want to stop, you can email me the word unsubscribe.
Posted by David Boyle at 22:25