The energy and experience of small-scale publishing 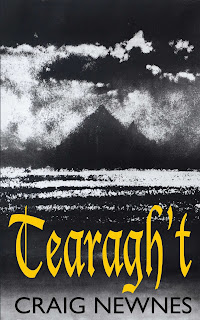 Regular readers of this blog, should there be any, will know that I also run a small - not to say micro - publishing enterprise called The Real Press. Well, I've learned a little in recent weeks about the sheer energy in small publishing. But first, have a read of this...

Thysse message is o’er long. It doth comprise two main parts, a briefe note from one of mie oarsmenne on the findinge of the Spaniartt’s papers and the translat’d papers themselffes. These are in onlie part sensible order as the oarsman had yet to right them and the manne that translat’d the Spanish writinge simplye retold the tale in the order receiv’d. The originale paperes have disapper’d thysse xi daie of September 1589. They were soak’d butte legible and found bound at the stern of a small craft adrift in the baie call’d Coumenole.
So begins the new novel we have just published, by Craig Newnes. You may notice that at least half the novel is written in a language which has been invented by the author so successfully, and authentically, that we sink into the 1580s as if we had never gone away. Craig is also an eminent psychologist, and the book is as much about human relationships and love, erotic and otherwise, as it is about the Armada. But the language this adds depth to the whole experience.

We wanted to publish Tearagh’t because of this sense of another reality, moving under the surface – and because believing you are in another moment of history is a rare experience. Making it possible is one of those underlying purposes that the Real Press was set up to achieve. Personally, I think Tearagh’t succeeds triumphantly – so let me know what you think…

But the real lesson to me of the experience of publishing Craig’s book was that – perhaps for the first time – I became fully aware of the possibilities and importance of small publishing. The manuscript for Tearagh’t has sat on the desk of a New York literary agent for nearly ten years. It could have been issued by the biggest and most prominent publishers in the world. But somehow they seek out the safe and the formulaic instead, and it falls to the new wave of small publishers like the Real Press to issue it. We are certainly proud to have done so.

By whether I am right or wrong about this, Tearagh’t is a brilliant read and something that lives with you long after you reach the final page. And that makes it a rarity. See what you think!


Subscribe to this blog on email; send me a message with the word blogsubscribe to dcboyle@gmail.com. When you want to stop, you can email me the word unsubscribe.
Posted by David Boyle at 22:05