Homage to Catalonia - and what it means 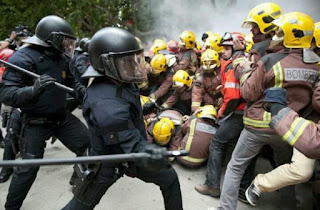 This article is crossposted from the Radix blog...

Sometimes all you can rely on, to understand some sense of the direction events are taking us in, is a sense of history. As such, it seems pretty clear to me that the way the national authorities behaved over the Catalonia referendum guarantees that Catalonia will eventually secede from Spain.

Perhaps not now, perhaps not for decades, but eventually. What is more, it may also provide enough of a political impetus to other nations-within-nations , like Scotland, to go their own way. When firefighters have to stand between the crowds and the police to protect people, then something will inevitably change.

Nor is this necessarily a bad thing. Centrist politics has tended to be unionist. Liberals have certainly looked askance on every kind of nationalism, except possibly Irish. But something is changing, and I suspect that - among the mix - is a different attitude to economies of scale.

If your whole political system leaned heavily on the justification of economies of scale, then it made sense to subsume the parts in a greater whole. But if you recognise how rapidly economies of scale are overtaken by diseconomies of scale - as most people do now outside government - then the argument for unionism and the old-fashioned concept of nation states begin to unravel, along with all the other prevailing ideas that came along with the age of the assembly line.

I have written before about Freddie Heineken's vision of a Europe of nation states with around eight million people in them, and certainly there are successful nations and city states a good deal smaller than that.

People are frustrated with the sheer ineffectiveness of central governments, so divorced as they are from the real levers of power - which exist at very local and city level, where they exist at all (Sir Keith Joseph used to complain that he had spent his entire career trying to get his hands on these levers, only to find they weren't connected to anything). It maybe that this frustration, combined with the disillusion with the idea of economies of scale, will usher in nationhood - not just for Catalonia, but the Scots, and others. There is a similar referendum in northern Italy shortly.

What is more, if we are radical centrists, there are reasons for suggesting that this maybe a more peaceful, more effective way of governing than the current posturing of nation states and national parliaments. The days of Liberal unionism may be running out. It was after all another expression of the very nationalism it rejected.

But there is one pre-condition for success for this kind of transformation. We must retain the old national umbrellas. Without a continuing role for 'Britain', we risk unleashing the most dangerous kind of intolerant nostalgia. More immediately, we would lose the possibility of rebalancing the separate economies around the old nation, shifting resources from the rich areas in surplus to the poor areas.

If we don't do this, we risk creating a Europe of competing nation states - like G K Chesterton's Napoleon of Notting Hill - with the big poor ones that are left behind battling with the smug small, wealthy ones. It was the lack of this very mechanism across the eureozone which has led, predictably, to the rise of the far right. The European Union could also provide it, but will they? And can they, inside the UK?

That makes revolutionary separatism, of the kind encouraged by the actions of the Spanish government in Catalonia, not just unhelpful, but downright dangerous.

We are nearly due a major shift of the political and economic mainstream - we have one regularly in the UK every 40 years - and it is worth arguing that Brexit and Trump are not the shift. They are more like John the Baptist, bearing witness to the shift. I am wondering whether the real shift, a response to the sheer uselessness and corruption of central governments, may be this radical localism.

I think it will happen, partly thanks to the police in Barcelona. But it needs to be done safely, or will will lead to the kind of bloodshed we saw in Yugoslavia. It has to be done deliberately by enlightened statespeople, slowly, bravely, constitutionally and under the continuing umbrella of the old national identities and their vital economic functions.

Subscribe to this blog on email; send me a message with the word blogsubscribe to dcboyle@gmail.com. When you want to stop, you can email me the word unsubscribe.
Posted by David Boyle at 13:03