Can you ever use slavery as an analogy? 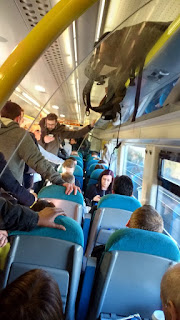 Being beaten up on twitter concentrates the mind wonderfully and, although I wasn't badly beaten, I have been thinking about what I clearly did wrong.

I knowingly, wilfully and with aforethought, compared my two journeys to London and back with Southern Rail to a slave ship.

This was pretty crass. There were no chains, no whips, no cholera and no fear of death. Of course it wasn't anything like a slave ship and I never thought I was doing more than drawing an analogy. But I am not supposed to do such things, so why did I do it?

The answer is that I wanted to get across the idea that the people on the train were not just squeezed in next to each other, but also had no choice in the matter. They had absolute choice of course - they could choose not to go to work or to see their families that evening - but in practice there was an element of compulsion. More than an element.

Now I genuinely don't know who was right here. I understand, of course, that to compare a horrendous thing with a less horrendous thing can certainly sound idiotic, because nothing in a sense can compare to the horror of the slave trade - and it isn't just the slave trade that is in this category of incomparables in this corner of political correctness. There is the added issue that I am white and can therefore not fully appreciate the horror. I know all that.

And yet and yet, there are issues about slavery and the economics that leads to it that I very much want to talk about. It seems insane that I can't use an analogy that allows me to communicate why I am worried abotu certain trends in the centralisation and monopolisation of corporate power.

I have in fact been in this argument before. Last year, I tried to get a commission for a book called The Slavery Economy, which explained the politics of the anti-slavery movement and how it fed through into a Victorian obsession with the evils of monopoly power. And because we have closed our eyes to this phenomenon in our own age, we seem blind to the threat that monopoly power now poses to us.

In other words, because it is now difficult to talk about slavery in any other context, to use it as an analogy in any way, have we actually failed to understand the very potent economic roots of slavery?

But the people who decide these things got cross with me about the book. Was I shackled by Amazon, even though it is rapidly dominating the gobal retail market, virtually tax free? Was I forced into the hold by Google because they dominate so much activity? Of course not. But there is an element of growing compulsion about it - and it does tend towards a kind of slavery - it is just that I wasn't allowed to say so.

Let me explain. It is one of the great ironies of history that, east and west, the liberation of the agricultural slaves and serfs – the people who carried out most of the work in the fields of Russia and eastern Europe and the plantations of the southern US states – happened almost simultaneously.

The slaves were freed by the Emancipation Declaration of Abraham Lincoln in January 1863, though it required another two years to win the Civil War and finish the job. But the Russian serfs were freed from bondage to the land at almost the very same time. The declaration was in March 1861, to cheers outside the royal palace in St Petersburg, but it also took two years and came to fruition in February 1863, just five weeks after Lincoln promulgated his Emancipation Proclamation.

Both liberations were great victories for the anti-slavery campaigners, more than half a century since the first successes of the campaign against the slave trade. But they were also great disappointments for agrarian radicals. Because, in both cases, the slaves and the serfs were catapulted from bondage into poverty.

In the USA, slavery was replaced by peonage and debt bondage. In Russia, the land was valued at three and a half times its market value, and this the impoverished serfs had to pay their former owners over a period of 49 years. For many serfs, even the details of the terms were not agreed for decades. Just as the former slaves had been in the USA, many of the serfs were thrown on the mercies of the money lenders.

In short, it wasn’t enough to release the slaves – you had to release them from debt and monopoly and the economic tyranny that replaced it.

By then, the basic tenets of free trade had been set out – by David Ricardo and by the political campaigner Richard Cobden. Cobden died in 1865, so he hardly lived to see the aftermath of liberation. But he knew all too well that there were such things as economic manacles. If you just set slaves free, you could bind them just as firmly by forcing them into debt and controlling where they could buy what they needed – just as the Corn Laws forced the English poor to buy bread at inflated prices.

So the original idea of free trade is not a simple license to do whatever you want, if you were rich and powerful enough. It was thoroughly aware of Adam Smith’s original warning that collusion between entrenched businesses can end in “a conspiracy against the public”. It was designed as a means of liberation – so that the small could challenge the big, the poor could challenge the rich with the power of the new approach, the alternative provider, the imaginative, liberating shift.

But over the past two centuries, the doctrine of free trade become its own opposite – permission for the rich to ride roughshod over the poor, an apologia for monopoly and an extractive discipline that prevents the all-important challenge from below. Somehow, the global economy has turned in on itself – instead of promoting economic liberation, as Adam Smith envisaged, it has become a tool of what, if it is allowed to develop, becomes a tool of servility - and maybe even slavery.

That is how Columbus enslaved the Tainos, how the British dominated India, how the Romans held their empire together. Are we not allowed to use the S word at all?

Here is the dilemma faced by the newly released slaves and serfs in the 1860s. They had nothing. To earn wages they had to pay rent on their tools, they needed the right to work on their former plantations. They had to pay ruinous rent on their new homes and they were offered loans to be able to do so, which they could never pay off. They had no choice where they bought their food. But it wasn’t ‘slavery’ because they signed the contract on the dotted line. Or was it?

In 1912, Hilaire Belloc launched his own brand of Liberalism with his book The Servile State, arguing that both capitalism and socialism tends towards slavery. It was an insight that launched the Distributist movement in the 1920s. It doesn't seem to be a language that we are now allowed to use.

Now, I'm sure some people will profoundly disagree with this, but - since I have been able to set out my thinking in such a way that I hope people can understand that I am not, in any way, denying the horrors of the slave trade - perhaps it might be possible to have a polite dialogue about it. Fingers crossed...