Ten ways of the Absent Corporation 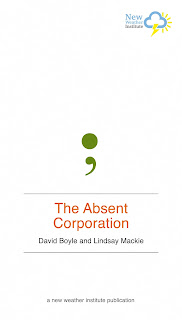 Let’s call it Catch-23. It is when you load your old version of Word onto a new computer and you are told that Microsoft cannot verify the code online, and that it has to be done by phone (see numbers below).

Then you find that telephone verification is no longer available for this version. You are caught in a very familiar double bind.

It is familiar also from dealing with many of the new generation of internet behemoths. The service is fine until something goes wrong, then – silence.

Try contacting Youtube because your children are being harassed by online bullies, or one of Amazon's suppliers when your goods don’t arrive – and you can find, as I have on both occasions recently, that nobody replies.

The truth is, as Lindsay Mackie and I explain in our new pamphlet The Absent Corporation: Why big companies don’t want to see you, this is a very modern phenomenon – the great silence at the heart of these newly empty organisations.

I’m tempted to say, like Elizabeth Barrett Browning, ‘let me count the ways’, but in this case I will just count to ten…

1. The customer service lines which have been outsourced (even Waitrose) to specialist online providers.

2. The alarm buttons and online feedback clickthroughs which are manned and never get a reply (we all know which they are).

3. The CRM software that has no space for your particular issue (most of them).

4. The deluded company HR departments that think than customer service can be replaced by a five-point scale for every ‘interaction’.

5. The rise of human-free trains and self-checkout – increasing at five per cent every year.

6. The tide of computerised selling, which is now used by 80 per cent of American companies.

7. The transformation of service staff into security guards – to police how we use self-checkout machines or get on trains.

8. The regeneration companies with no real existence apart from a name plate in an offshore finance centre like Jersey or Dingle.

9. The dark and silent flats on the investment estates in London, owned by absent investment companies in Shanghai and Singapore.

10. The increasing use of virtual teachers and doctors, mainly to service poor people, and the strange amnesia about the transformative effect of relationships with professionals.

None of this suggests that there are never benefits for human-free interaction, but it is another thing to say that software can tackle every conceivable problem – or that there should never be anyone there to help when something goes wrong.

This is a symptom of financialisation and a kind of tyrannical Taylorism, but most of all it is about the rising imbalance of power between these vast public and private semi-monopolies and the increasingly powerless people they serve.

See my Guardian article on the Absent Corporation. You can also buy the pamphlet here, or as a kindle edition here or as a pdf here.