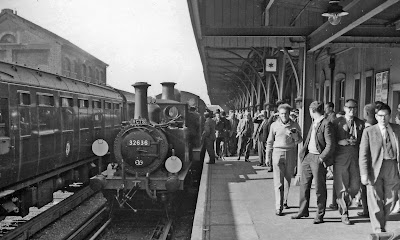 I write this blog about all manner of things, and especially - this is rather the purpose of it - about my books. But there is no doubt, it just electrifies when I write about Southern Railways. I try and move on but I'm drawn inexorably back - as I was yesterday.

But then two things happened yesterday, both related to the ongoing crisis at Southern, which speak directly to the themes of this blog - the appointment of a new chief operating officer at Govia Thameslink, Southern's operators, and the focus of attention on the beleaguered Seaford line.

The new COO hides the fact - which has seeped out the way things do in Soviet-style news organisations - that Dyan Crowther has moved on, to HS1. I only talked to her directly once and we got on perfectly well, though I have since heard through the grapevine that is somewhat cross with me (I won't say what she actually said).

I can understand that. I also have some sympathy for Dyan Crowther, just as I did for the equally beleaguered rail minister Claire Perry before her surprise resignation. Both were caught in an impossible situation, where no room for manoeuvre was allowed, no flexibility to see the situation as it really was, no freedom to speak the truth - or even to seek it out.

Both Dyan and Claire made serious mistakes. But, overall, they were caught in the same dishonest machine as everyone else involved in the Southern fiasco. Because GTR is a financial agglomeration, run by accountants for accountants, and also has to run a railway with at least 20 per cent fewer staff than they need. It is hardly surprising it doesn't work.

They can't say publicly that anything is wrong (except to blame the staff, of course). Anyone who has been in this situation - which is anyone in a large organisation run for accountants - will know how the lies begin to manifest themselves. They know how that corrodes from the inside, until finally all you can do is escape.

When being economical with the truth becomes an outright lie, then it undermines your health, your morale, the morale of your staff and, finally, the organisation begins to fall apart.

A case in point is the Seaford line, which had 80 per cent cuts to its service during the summer months, and has just had its service restored. But at what cost?

At least eight Southern managers have been taken away from their desks, mainly in Brighton but also from East Croydon and given a crash course in being guards.

At least one, as I understand it, has appealed on the grounds that they may be legally liable if there is an accident, especially if they know themselves to be inadequately trained. These are not volunteers. They have been told that they will be away for eight weeks - nobody has replaced them in their management responsibilities. See the leaked memos here.

It isn't clear what will happen at the end of eight weeks. There is more than a whiff of desperation about this, given that the trains on the Seaford line are not equipped for driver-only operation.

Meanwhile, there are still empty rail replacement buses running a 15-minute service from Seaford and will apparently carry on until at least the end of the week.

There is something hopeless about this. I'm reminded of the late Robert Maxwell, taking out new loans every night until all the banks were closed to him. Or Harold Macmillan talking about selling off the family silver. Or General French flinging his army cooks into the front line at the Battle of Mons. It is what happens when fundamental untruths catch up with you.

I find it terrifying and I thank goodness I don't work for GTR every day I find myself in their vicinity. There is a sense of dead man walking about them, so desperate that everything should seem normal that they have to redistribute their managers onto the front line as if what they did before was unimportant.

The sickness lie has already been established with the fact that some cancelled trains that were blamed on staff sickness/shortage of train crew, were due to faulty units/broken down trains. When called out on this, Southern apologised (but not publicly) saying it would have been communication errors, this happened too many times just to be incompetence. Secondly conductors have had to produce a doctors certificate if they want to be paid even if only off work for a day or two. Lastly staffing levels at Southern/GTR are chronically low in particular Southern conductors. I hope the crowd funding established to investigate the Government's/DfT's handling of Southern's failures, publishes the truth and holds those perpetuating falsehoods to account.