At last, a way for passengers to take back control! 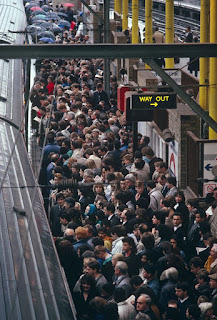 "Men fight and lose the battle," said William Morris in A Dream of John Ball, "and what they fought for comes about in spite of their defeat."

That is the grammar of change (though most politicians don't get it). So instead of being a little downhearted that GTR/Southern's operators Go Ahead has made £100m in profits this year - despite their obvious inability to discharge their duty to their public in the south of England - I'm actually rather optimistic.

1. Because the shadowy absentee landlords of Southern at Go Ahead have been forced into the open, to go public about how they are extracting resources yet failing to do the work. It was about  time (Go Ahead chair Andrew Allner has made a statement which has been widely quoted, but the BBC link takes you to a private website marked "only for investors").

2. Because Transport Secretary Chris Grayling has taken my advice and set up an inquiry into the disaster at Southern, Thameslink and the Gatwick Express - just as I urged him to. In fact, he has put "an experienced rail executive" in charge of it and given him a budget of £20m to sort out the problems, whatever they happen to be (I could have told him without all the effort, but more on that in a moment...)

3. Because finally, the passengers are getting themselves together with a crowdfunded action for judicial review against the government.

This is especially important because it is a potential way forward to make things happen by the put-upon passengers, without them having somehow to dismiss the whole government - or to go on strike in some way.

The perils of strikes are obvious from the two most public disputes at the moment. The junior doctors have clearly been infantilised by years of central government targets, so much so that they are prepared to put patients at risk without having a clear idea what they are actually striking about.

As for the RMT, Chris Grayling's long-awaited intervention demonstrates that he finds the situation easier if he can blame the rail unions rather than face up to the real problems. Again, more on this in a moment.

I know - because I'm one of them - that the passengers are angry enough and, between them, wealthy enough, to fund a legal action. The barristers need an initial £10,000 to get started, and to start the action - and start demanding documents from the Department of Transport. The case is being managed by the brand new, and homegrown, Association of British Commuters. This is what they need:

1. Donations, however small, now and in the future - find out more here.

2. Information from individuals who have lost jobs or livelihoods because of the government's far too cosy relationship with their incompetent contractors. Contact here.

I'm certainly going to contribute, if for no other reason that passengers can show they have some leverage in a situation where Department of Transport officials and the even better paid Go Ahead executives between them seem to have it all.

But don't let's leave Chris Grayling's article quite yet. I've said I was optimistic: that was partly a result of reading what he had to say.

Because no modern minister has had so muddled an article drafted for him by his officials before, and that means something. At some level he must realise it too.

He blames the unions for the disruption on the non-strike days, explaining - quite wrongly and with no evidence at all - that "train guards have been calling in sick in unprecedented numbers .... what is clearly an organised attempt to disrupt services".

As most commuters know, the heroic efforts of the guards - faced day after day by furious passengers, crowded platforms, dangerously overcrowded trains and no information - have been the saving grace for many during this appalling period.

Grayling manages to demonstrate in the most embarrassing way that (a) he hasn't talked to frontline rail staff, (b) he hasn't talked to passengers, and (c) he has only talked to a small coterie of officials and Go Ahead executives in his cosy bunker. It is, in short, time he got out more.

If he had been, he would know that GTR no longer employs revenue support staff, that they have contracted out cleaning and engineering and some ticket collecting to agency staff with no commitment or regularity, that they have closed ticket offices, and have discussed turning some of them into mini-supermarkets. He would know that they are continuing to organise voluntary redundancies even though they have a continuing and unaddressed staff shortage. He would find, in short, that GTR is an extractive money-maximising machine which happens to run a few trains, and doesn't do it very well.

He would also discover that the sickness is back to normal levels, without really improving reliability.

And he would know that there is another explanation for the high levels in May. GTR insisted that any sickness absence needed to be covered by a doctor's note. As most people know, these are only available for weeks off work, not days off - which guaranteed that more staff were of for longer than they otherwise would have been.

In fact, the failure to acknowledge the loyalty and commitment of guards and platform staff has been an important factor in the current dispute.

Personally, my feeling is that the best response to this kind of bluster is to put money into the legal case against the government. Remember: commuters don't have to win the case to win - all they need to do is force the officials to drop these parrot-like, patronising responses. And they will.


See my book Cancelled! on the Southern Railways disaster, now on sale for £1.99 (10p goes to Railway Benefit Fund).
Subscribe to this blog on email; send me a message with the word blogsubscribe to dcboyle@gmail.com. When you want to stop, you can email me the word unsubscribe
Posted by David Boyle at 09:19

Great article and thanks for the links to crowdfunding. Just a note on your "private website only for investors" comment - that is not a private website, that is an RNS (Regulatory News Service) that is publicly available, and a requirement if the company is quoted on the stock market.

The Southern Railway actually made a loss. The £100 million profit came mostly from bus operations. The £20 million from the D f T is for improvements to be carried out by Network Rail and the retired BR manager Chris Gibb is getting £1500 per day for his services. I just hope he will not be needed for too many days.

As was pointed out on LDV by a railwayman the problems afflicting the rail service are mostly caused by the inability of the publicly owned Network Rail to carry out the work necessary to permit the operation of the increased number of trains apparently needed for the higher number of passengers being carried.

The changes in the role of guards is a measure ordered by the Government to reduce subsidies. In any case it is probably safer for the driver to open and close the doors as they have done on the METRO services for years.

The Mayor of London is being disingenuous when he say the Southern is to be taken over by TfL soon. They are hoping to take over the local commuter services around London but not the longer distance routes and in any case their record of dealing with industrial action is a very poor one as those who rely on the London Underground will be aware.

Something needs to be done about the Brighton to Ashford (dis-)service too. This two-carriage train has always been too short for the number of sardines carried, and there are only two such trains on this route, so whenever anything goes wrong, it can lead to long delays at the best of times, and these are NOT the best of times.

On Saturday (September 3rd), we were packed in tighter than ever, with at least one cyclist unable to board, and hardly room for the rest of us to breathe.

Fewer and fewer platform staff at stations. More and more unmanned stations. I won't be able to travel at all when they get rid of the guards.

Being disabled, I'm not allowed to use the rail replacement buses, and most taxi drivers and operators refuse to carry mobility scooters nowadays, in violation of the law.

I don't blame the striking workers or condemn their right to join a union in the hope of keeping their jobs. Without exception, they remain cheerful and helpful in an impossible situation. I blame the employers and their accomplices in government.

Chaotic railways, badly potholed roads and pavements, the state of the NHS, chaos everywhere we look. It's as if the government is deliberately shutting the entire country down, but for what?

shame your acumen isn't as correct when it comes to junior doctors.

"so much so that they are prepared to put patients at risk without having a clear idea what they are actually striking about."

they are striking for patient safety, same as the trains. They are striking for their safety and to avoid a clash of work/life balance. They are fighting for the very NHS they work in. This one line is offensive to the thousands who are saving lives every day and fighting for our health service, one of the worlds best, even with the tories trying to underfund and dismantle it as much as possible

Rob, I think your long list rather confirms the point. What is it, precisely - and it does have to be precise (not just a lost of reasonable complaints - do the doctors want to achieve by withdrawing their support for patients?

As somebody recovering from a life-threatening illness, perhaps I can add something to the medical side of things.

Last year I lost about 3½ stones (about 50 pounds) in weight and was near to death when a friend called an ambulance for me.

The diagnosis was heart failure.

Since then the Brighton hospital staff have performed a miracle. I know I've been lucky at a time when some people can't get the treatment they need, but I couldn't have had better treatment, and I can't praise the medical teams highly enough.

I'm still being monitored by the excellent heart failure team led by doctor Ellery, but thanks to them and others I've made a full recovery, and am told my heart is stronger now than it's ever been.

My limited understanding of the junior doctors' dispute is that they work incredibly long hours, which itself can endanger patients and the doctors themselves, and now the government is imposing severe pay cuts.

That's probably not the whole story, but both main political parties have been working for decades to dismantle the NHS, until now it's at breaking point.

Politicians are supposed to be our servants, running the country for the benefit of all, but they treat us like cattle, with them as the farmers.

"a way for passengers to take back control"

Do they really have to take back control? Can't they just, I dunno, assume greater autonomy, or claim greater freedom or something?