What the Lib Dems can learn from Trudeau 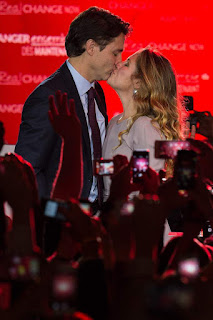 I gather that expectations were so low for Liberal leader Justin Trudeau in Canada ahead of the first election debate in August - this has been a long campaign - that the Conservative leader’s spokesman said: “If he comes on stage with his pants on, he will probably exceed expectations.”

Given that 'pants' has a slightly different meaning on that side of the Atlantic, that isn't quite as bad as it sounds. But it does emphasise one of the lessons from the Liberal landslide in Canada - one way of building momentum for a Liberal campaign is to do better than expected.

I've been reading the Canadian press to find clues about why Trudeau managed to pull off such a spectacular success, from third, for a message of hope not fear. I must say, there aren't many.

There are people who say that there are only those two narratives in political campaigns - hope versus fear, or rather 'time for a change' versus Stanley Baldwin's old slogan 'safety first'.  They are hard to predict because public moods are febrile and way ahead of the politicians.

Trudeau was halting in debate, but passionate. He knew what he believed. He wasn't a clone or a Blair. He was authentic.

But the Canadian Liberals managed to do as well as they did perhaps because of two fascinating factors.  First, the Conservatives were struggling at the time to ban the niqab. That is, of course, a wholly illiberal form of dress, but nonetheless - you don't want the government interfering in what people wear.  Nobody wants that - and even the medieval sumptuary laws didn't go down very well at the time.

Second, Trudeau managed to steal a march on the NDP, his opponents on the left, which were trying to detoxify their own brand by promising to balance the budget. The Liberals were excited when they announced this because it meant that they could promise a small unbalanced budget in order to invest in future infrastructure.

This confirms my own sense of the zeitgeist, which is now hurtling towards the regular forty-year shift in mainstream economic thinking - people are aware that something needs to change, but they are not sure what. They are not going to vote for people they don't trust to keep their heads - or keep their trousers on in debates - but equally, I think we may be entering a period where they are not too keen on politicians who grip conventional thinking too tightly.

In other words, Osborne may look safe one year and then puritanical or doctrinaire the next.

Whether our own Lib Dems can manage to arrange themselves in such a way to attract this new spirit, I don't know. They will have to be safe and responsible, but also to embrace the economic future. For a time, that is going to be mean they will have to be passionate, excited about the future - but at the same time to recognise that it isn't going to be like the present.

Positive change is a difficult act to pull off. It means you have to stop complaining about the present (though of course to tell the truth about the abuse of power and money) and to assert the future. If you can manage that, it gives you an unexpected authority.

And when you can do that, the other side has to respond to you. It is precisely the opposite to the way the left has campaigned over the past decades.