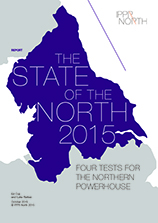 I was very grateful to IPPR North for inviting me to speak at their conference on the State of the North this morning – partly because it’s nice to be asked, and partly because it allowed me to get my own ideas together about the Northern Powerhouse.

It also allowed me to listen to John Prescott and Dan Jarvis, which was a slightly depressing experience, if only for the strained atmosphere of hope-over-experience.  I'm not often exposed to Labour rhetoric these days and I didn't find it inspiring.

The report IPPR North published is pretty important, setting out some of the measures by which we might judge the economic resilience of the northern cities. It’s quite right that conventional measures like GVA don’t really hack it. Build a couple of luxury marinas and the GVA goes up without making any contribution to a new Northern Powerhouse at all.

I can’t help thinking on these occasions of Joseph Chamberlain, because he created his own northern powerhouse, centred on Birmingham in the 1870s, by basing it on the assets which Birmingham already had.

I’m sure he would have toured the equivalent of Chinese cities, begging for investment, if he could have done, but it wasn’t his prime focus. His main drive was to re-imagine the provision of gas and sanitary services to the city, not as an exhausting cost but as a huge potential asset.

He also wrested control of the city in 1873 on behalf of the Liberals from a group of councillors who met regularly in a pub called the Woodman’s Arms and who dubbed themselves The Economists. Their policy was to spend as little as possible. I’m sure the Treasury would have approved of them, but they needed to be cast out in favour of people with more of a powerhouse mentality.

Because the truth is that the idea that people are the assets a city has remains largely rhetorical. There must be a connection between the fact that people live there, that they have needs and imagination and the potential of economic activity – but we have forgotten what it is.

The emphasis remains still on an imperialist mindset – it is about attracting investment to the north, building them roads so that other foreign corporations can truck their goods more easily in and out, and a little will trickle down and stay put. There is a supplicant element to the economic language about devolving powers to the north still, despite the powerhouse clothing. It is dependent.

Worse, most government regeneration policy is also dedicated to the idea that successful people living in unsuccessful places should be encouraged to leave. In those circumstances, you might be able to grass over Bradford and still call it a success.

What really provides the link between people and economic success is the ability to make things happen, as Anita Roddick put it, when she defined entrepreneurs as people able to “imagine the world differently”.

Put like that, what is getting in the way of the Northern Powerhouse is not just the lack of skills, it is the bizarre division in UK education between the machine-minders and the professionals, secondary moderns for the former and grammars for the latter – and apparently nothing in between. We are still not educating our children to make things happen.

There is also remains a residual horror in Whitehall, or to be precise in the Treasury, about local economic revitalisation. They don’t believe in additionality – they think all local economic activity is simply shifted over the border from somewhere else. It is a kind of imperialist reductionism.

So what should the cities of the Northern Powerhouse be asking themselves? These are my nominations:


Ask those questions, come up with imaginative answers, and you too can be Joseph Chamberlain...
Posted by David Boyle at 19:05

He isn't on my Christmas card list because I can't forgive him betraying Mr Gladstone and having ideas like protectionism. But really, didn't he thank, erm, Benjamin Disraeli for granting councils such powers as he went on to use? is it a parallel? :)

Gosh, you may be right!

"...the strained atmosphere of hope-over-experience."

That, sadly, is already a road well travelled by Scotland. The Gordon Brown 'vow' of 'a modern equivalent of Home Rule' has never yet been delivered. Indeed, the morning immediately after the Scottish independence referendum result, ever-chameleon-like PM David Cameron waylaid the entire process. He did so with his amoral opportunism that is EVEL.

Brown's 'vow' was effectively reduced to the status of an embarrassing legacy of referendum campaign excess rhetoric and hype. I suggest that 'Northern Powerhouse' is something similar - an embarrassing legacy of General Election 2015 campaign excess rhetoric and hype. 'Northern Powerhouse', like Mayors and 'City Deal' is part and parcel of a wider domain of such excess so far as the English 'regions' are concerned.

David you are IMO right on the button when you finger the Treasury in all of this. I'm finding it increasingly tough to not become totally despondent about institutional UK. I say that because of, again IMO, the over-arching dominance of what might be termed the metro-London elites (not the ordinary people of London. The UK Treasury is not, however, the only UK institution that seems deeply stuck in a highly centralist mindset on all matters whether economic, cultural or social. Hence, the almost farcical positing HS2 as anything other than a new super commuter line in the further service of a burgeoning London services economy.

To expect those elites to somehow now instigate and drive the UK programmes of deep structural reforms that are well overdue seems wholly unrealistic.

Meantime other UK cities are urged to try better to emulate the so-called London 'success story'. The story of a city with some of the worse and growing extremes of unmerited inequality in wealth and income (and health) of any comparable city in a Western economy.

I think you are absolutely right, Edward. There is hope I think in the determination of the cities to make devolution work, but I don't think they'll be getting much help from the Labour Party who would prefer the whole experiment to fail...