The new 'human' megatrend. Not before time. 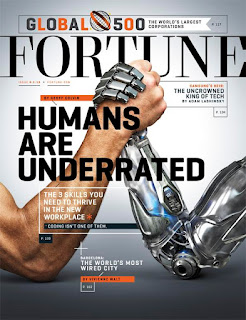 I was looking back at the introduction I wrote to The Human Element, eventually published in 2011 but inspired by the dysfunctional approach to public services by the Blair-Brown regime (the real New Labour 'virus').

This is what I wrote about the prevailing fear of human error:

"We live in a world which believes two contradictory things at the same time: we must set people free to innovate to make things work, but we must control them tightly to make sure they don’t make a hash of it. We believe both these even though we can see the consequences all around us, and even though in practice they cancel each other out. We believe in people’s skills but we are terrified of their ability to mess up. It’s a perfectly sane position – both thoughts are true – but, in practice, this is a destructive contradiction which simply stops things working as they could. It is the reason for so much frustration....

"Nobody wants to live in a world without processes. We don’t want to make it all up again from moment to moment. But the truth is that it is this very distrust of the human factor by the technocratic systems that run our lives that is the real problem. It is true that humans make mistakes every day, especially when they are tired or unhappy. They don’t fit neatly into the required categories. But they also possess the most extraordinary abilities, and do so from birth. They learn to live, to bring up children, to lead – most of them – generally happy lives where they fall in love and make things happen, and they do so every day.

"Human beings do cause mistakes, but they also deal with human complexity better than any machine. We are in danger of forgetting one of the most important truths about the world: the human element may be a source of error, but it is also the only source of genuine change."

I apologise for such a lengthy quotation. The reason for doing so is the latest cover story of Fortune magazine, which carries the headline 'Humans are underrated'

This turns out to be based on a book with the same title by the most forward-thinking of all Fortune's writers, Geoff Colvin, with the subtitle 'What High Achievers Know That Brilliant Machines Never Will'.

It seems to me that there is something emerging here.  Colvin's book is about business, making the point that actually the skill shortage is not going to be coders - whatever it might seem now - but people with empathy, who can build relationships and make things happen.

My book was about organisations, and especially public services.  There is also Steve Hilton's new book More Human, which says similar - or at least related - things about public policy.  All of us are, in one way or another, standing on the shoulders of Bryan Appleyard.

The point is that machines are now superior to humans for most practical tasks. That is an economic problem and challenge - there will need to be some other way of providing people with the basic necessities. But it also puts the spotlight on those skills which we have downgraded - the human ones.

"For the past 10 generations in the developed world, and shorter but still substantial periods in many emerging economies, most people have succeeded by learning to do machine work better than machines could do it. Now that era is ending. Machines are increasingly doing such work better than we ever could. We face at least the opportunity to create new and better lives.

"Staking our futures to our profoundest human traits may feel strange and risky. Fear not. When you change perspectives and look inward rather than outward, you’ll find that what you need next has been there all along. It has been there forever. In the deepest possible sense, you’ve already got what it takes. Make of it what you will."

What I find infuriating is that, as the most successful corporations are discovering how this relates to success, our public services - still in the grip of McKinsey-inspired Taylorism - are still peddling the old suspicion. No wonder services have got so expensive.

Thanks David for suggesting John Seddon's books, which fulminate against managements oriented towards micro-controlling staff and costs, when they should be managing the system and avoiding 'failure demand'. This article shows that it's a lesson that never seems to be learned in education or the NHS or other state-run industries!