Crimea and its terrifying echoes of Munich 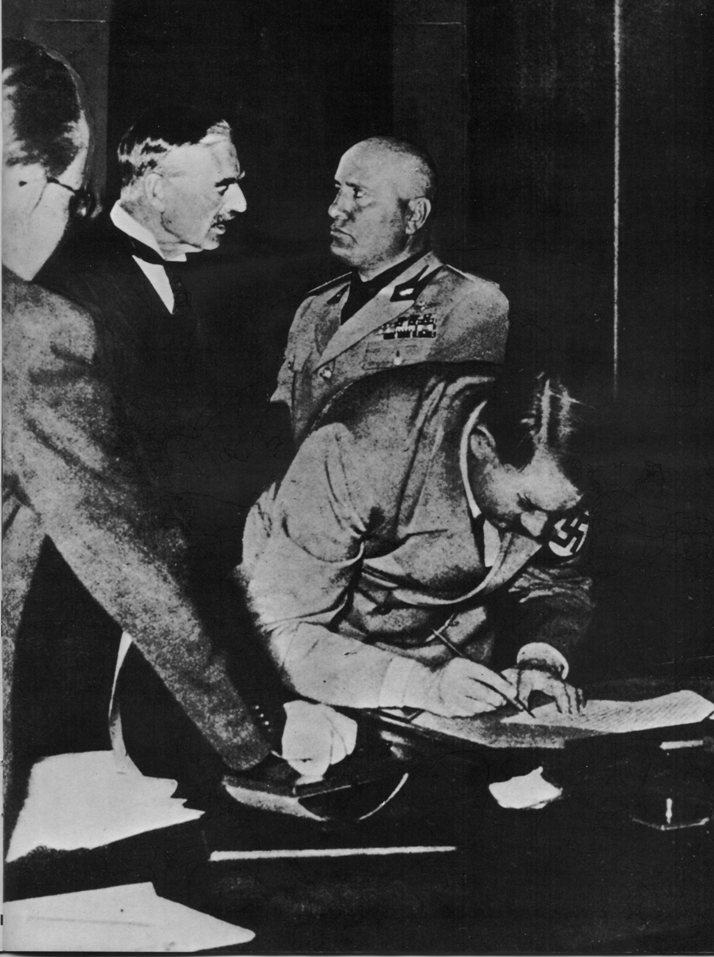 My great-aunt was Observer correspondent in Prague in 1938.  It was said that she wept the whole way home by train after the Munich agreement, as she returned to launch a rather belated Penguin Special called Europe and the Czechs.  By then, Britain and France had agreed to Nazi annexation of the Sudetenland.

I keep thinking of her as the depressing and frightening news from the Ukraine pours in, especially now it seems clear that the Russians seem intent on annexing the Crimea.

It is depressing because of the growing parallels between the two events, just 75 years apart.

The point about Munich was that it was a failure.  It was intended to end Nazi expansion and it only fed the beast, but that only became apparent six months later when they annexed the whole country.  Before that, there was a context of self-determination by the Sudeten Germans which made it seem as if there was a case to answer.

The key question before Chamberlain and Daladier was not whether it was right or wrong to let what seemed to be the majority have its will in the Sudetenland - but: would this be the limit of Nazi territorial ambitions?

That is the great fear about Crimea.  There is clearly a slither of a case for self-determination.  But would taking over the Crimea satisfy Putin, or would it just encourage him to look hungrily at Estonia, Latvia or Georgia?

That is why NATO is now patrolling the airspace in Poland and Romania.  It is why this situation is so dangerous.

It is also why people like Owen Jones, who believe that it would be hypocritical for the West to complain about Russian incursions, are wrong.  It is the most dangerous stand-off since the Russian invasion of Afghanistan in 1979 or the Cuban Missile Crisis of 1962.

We all know that European wars begin in Poland.  It is possible to imagine how Poland could be the source of another one.

But Owen Jones is right that self-determination is too simple a yardstick.  He is also right that we cling to it when it suits us, as it does in the Falklands or the Balkans.  Yet we also promote it when it doesn't suit us.  Scotland springs to mind.  Self-determination is important, but it is more than just winning elections - as any observer of Northern Ireland can see over the past generation.

This is why I remember my great-aunt, Shiela Grant Duff, whose book about the period describes vividly the fake self-determination of the Saar Plebiscite, and the terrible consequences after the vote for those who had opposed unification with Germany.

The question is this: will the Crimea vote be another Saar Plebiscite, with its terrible aftermath?  It begins to look like it will.
Posted by David Boyle at 11:24

Perhaps you could explain why bit is wrong for Putin to take part of a foreign country, inhabited by Russians who want to go, when it was right for LDs to enthuse over taking Kosovo and instaliing an openly genocidal regime of drug lords, sex slavers and organleggers?

The point is not that Putin is right but that he is doing much less than following the openly genocidal example you lot set. There are therefore no circumstances whatsoever under which it is moral for any member of your totalitarian party to object.

Neil, I'm really glad you read my blog from time to time - and we both know we don't disagree on everything. But don't you think it's a bit much to call people genocidal. I'm just trying to be a bit civilised - I may be wrong, and frequently am, but I'm not aware of being genocidal.

I'm sorry Neil, but your last comment was potentially libellous and I will be the one who gets sued if it's on my website. I really don't want to censor, and - if you can remove the implication about individuals - I'll happily publish it. But I'm afraid I've got a family to look after and I don't want to risk having to go to court. I realise you will probably say this is typical, but I have to take that risk...

If they are being genocidal is the mark of civilisation to be so polite as not to mention the fact?

It is undeniable that your party supported not only the criminal war against Yugoslavia but the atrocities carried out by NATO police - including ethnic cleansing, genocide, sexual enslavement & sale of girls & indeed boys, and the dissection of thousands of living people. These police were drawn from Albanians widely considered to be gangsters (some were released from US jails), drug lords, sex slavers and organleggers before being set up by NATO as a "liberation army". [I will not repeat the reference to the person who participated in training them though I have long done so on my own blog and have never been sued].

Though the official reason brought for my expulsion from the LDs was that I was an economic liberal I was subsequently informed that the prime reason was my objection to such obscenities. LD blogs almost all censor any mention of this - none of them dispute its truth. If you were to show a similar objection to atrocities you might well find the same - which would indicate that you are in the wrong party.

Indeed one senior LD once, when I publicly asked about this acknowledged that it was all true but that "Milosevic did it first". When I asked for evidence of this she said that she personally had seen Milosevic doing it in 1999 in Kosovo when she visited Belgrade in 1997. She declined to explain the apparent discrepancy but am forced to accept this as representing the normal standard of LD honesty.

I would put my money in the probability that we will have some significant conflict as a result of the Ukraine situation. Appeasing Hitler clearly didn't work. But pushing Putin into a corner and insisting on a humiliating withdrawal will not work either. At least in 1938 Hitler did not possess nuclear weapons.