Breaking the rules to break the news of D-Day 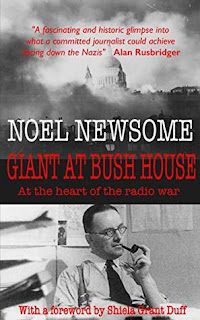 Noel Newsome was director of European broadcasts at the BBC European Service from 1939-44, one of the few who knew the secret date for D-Day. He was in many ways the architect of the BBC;s international reputation for truth - believing that truth was a potential weapon of war. This led him into constant struggles with the authorities, which he described in his newly-published memoirs, Giant at Bush House. Here he describes getting the news about D-Day out there...

"I had received my D-Day briefing. In the first week of June, the tides in the English Channel would be right for the great venture, and would remain so for about 36 hours. Provided the weather was all right for the air assault, the airborne landings and the sea borne invasion, the operation would take place during the night of June 4. Declarations by the supreme commander, Eisenhower, and by Churchill, Roosevelt and de Gaulle, were all prepared and recorded in advance for transmission directly the SHAEF communiqué announcing the landings was issued. This was timed for 10am on June 5 and strict instructions were given that no mention should be made of the invasion having begun until then.

All that night, I stayed in my office listening to the ceaseless drone of our aircraft heading for the continent. Early next morning, I got the news that rough weather in the Channel had prevented the assault. It had to be the next night or indefinite postponement. And we were still awaiting the arrival of the ‘V’ weapons. A nerve-wracking day passed and then another sleepless night, with the ‘planes again droning away across the city. Would it happen this time?

Soon after dawn, we began to receive flashes from the monitoring services and the news agencies, saying that the German news service was reporting Allied landings in Normandy and in the Calais area. We had every reason to believe that the reports of the Normandy landings must be correct, but believed that those of attacks in the Calais area were false, as we knew of no plans for landings there. But if these were false, might not those of the Normandy assault also be untrue? Might they have been put out by the Germans to enable them to claim, if bad weather had again prevented the invasion, that we had been repulsed?

My instructions were to wait for the SHAEF communiqué, not due for many hours even if landings had begun. On the other hand, our broadcasting services had built their reputation on the speed, as well as the accuracy, of their news. My own overpowering instinct as a newspaperman was to report the news from whatever source as soon as I got it.

Half-an-hour passed and German reports of Allied landings continued to come in thick and fast. I took the bull by the horns and ordered that we should start transmitting the German reports, with a statement that there was no confirmation of these in Allied quarters. Meanwhile, I took immediate steps to check the true position with SHAEF. This was not easy. Perhaps naturally, SHAEF was in a state of high excitement and it was impossible to get a clear telephone line for some time.

Eventually, I got through and secured confirmation that the invasion was on, that we were ashore in Normandy, and that a feint attack had been made in the Pas de Calais to sow confusion in the German defence. This was a great relief. Obviously, we could help the feint to achieve its purpose if we continued to relay German reports about the Calais attack as if confirming them. This we did...."

Read more in Noel Newsome's memoir of the war, published by the Real Press in paperback and on kindle.

Get a free copy of my medieval Brexit thriller The Remains of the Way on pdf when you sign up for the newsletter of The Real Press. Subscribe to this blog on email, send me a message with the word 'subscribe' to dcboyle@gmail.com. See also: www.david-boyle.co.uk. By emailing you are agreeing to your personal details being stored and used to send you our latest blogs. We value your privacy and your personal details will not be shared with third parties. You can find more information in our Privacy Notice (www.therealpress.co.uk/privacy/).
Posted by David Boyle at 22:32