The lessons of 1066 for Brexit 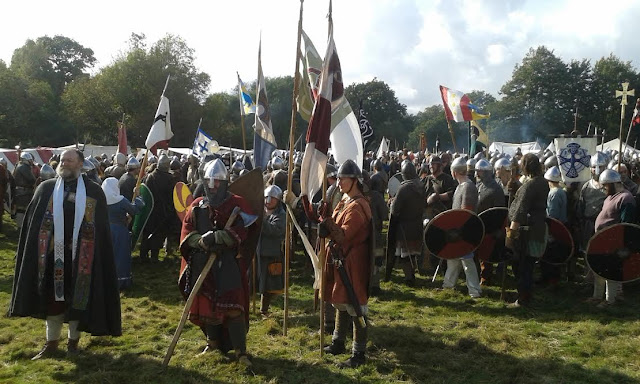 I spent yesterday watching the re-enactment of the Battle of Hastings, 48 hours beyond its 950th anniversary, in the grounds of Battle Abbey, and an extraordinary event it was. I was there partly to take my children and partly to sell my detective story based in 1119-20, Regicide: Peter Abelard and the Great Jewel.

It was also a moving experience, and I've been trying to put my finger on exactly why. I believe it was because it was such a pan-European event.

There was no doubt that the crowd was on Harold's side. But there was also a sense that this was what everyone said it was - the moment that England became part of Western Europe rather than Northern Europe. Although we might curse the destruction of the ancient liberties of King Alfred, and the Norman yoke (still with us), that is an inescapable fact of history.

There was, in short, something of a paradox about the day. On the one hand, there was this sense of sturdy English resistance to continental rule - a kind of Leave version of history, but one I have some sympathy with (Margaret Thatcher kept Kipling's poem 'The Saxon is not like us Normans' in her handbag during negotiations about the British rebate).

On the other hand, the amazing Saxon and Norman encampments, which had been braved by volunteers living an authentic medieval life for the weekend - despite torrential rain - was an inspiring example of continental co-operation.

There were members of the English Viking Society, but large contingents dressed as Saxons also from France and Germany, Spain and Poland. What united them was a sense of, and expertise in, a shared European history.

When Jean Monnet, the founder of what is now the European Union, said that - if he had the chance to relive his life - he would have based it on culture, not trade. Yesterday afternoon, on Senlac Hill, was enough to convince me that he was right.

Somehow, the European obsession with managing trade has allowed it to garner some of the centralised pomposity that has served it so badly in recent years. And, yes, I'm aware of which nation that was responsible for putting the single market at the heart of the EU. Yes, good old perfidious Albion, that's who.

But despite the great fog of Brexit, the recognition of a shared European history and culture was so much in evidence on the battlefield of Hastings yesterday, that it renewed my faith in a shared idea of Europe.

And somehow, it doesn't matter how hard our Brexit is going to be - and I've come round to believing that only a hard Brexit can liberate us from the so-called Europe 'debate', so that English history, as part of European history, can continue - that sense of shared history will continue to unite us.

It is also the spark on which we can rebuild a new European community when the EU has unravelled, and the contradictions and indignities of the euro - never mind Brexit - suggests to me that is the likely direction.

If only we had an imaginative, open-minded government, capable of clarity and strategy...


See my book Cancelled! on the Southern Railways disaster, now on sale for £1.99 (10p goes to Railway Benefit Fund).
Subscribe to this blog on email; send me a message with the word blogsubscribe to dcboyle@gmail.com. When you want to stop, you can email me the word unsubscribe
Posted by David Boyle at 09:38

Thanks, David. I am aware. But since the position of the abbey was set within living memory of the battle, I tend to believe that it was there - but, hey! What do I know?

Yes, it's arguable that we pivoted from Scandinavia to Western Europe after 1066.

Is it not also arguable that the loss of Normandy to the Angevin kings was the first "Brexit" in that sense? Because, forced to choose between their English and Norman lands, many lords began the process of Anglicising themselves, often learning the language for the first time, giving up on their Norman and other European ties and coming to have more in common with their subjects than their lordly counterparts in now foreign countries.

http://www.historytoday.com/nick-barratt/lackland-loss-normandy-1204
Thus it could be said that King John begun to put in process what Henry VIII was to "achieve".

I very much agree. In fact, the loss of Normandy was the moment perhaps when we started this strange process of being half in, half out of continental Europe - forever tipoeing in and the brexiting again. One comforting aspect of Brexit is that we have at least been there before..