The first 30 years of a new economics 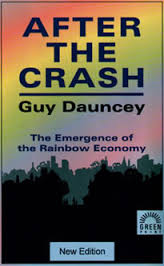 This is the third and final part of my blog series about the development of green economics in the UK over the past decades, designed to mark the 30th anniversary of the New Economics Foundation and its relaunch this week.

Two pieces of feedback first.  One, an extra zero crept in yesterday - so I should reassure anyone who remembers 1986 that it wasn't actually 300 years ago, but only 30. Two, I'm reminded (thanks, Pete) that one of the books which kickstarted the kind of green economics, highly practical, which I am describing here, was Guy Dauncey's groundbreaking After the Crash (1988). It certainly influenced me. The Crash described in the title was the October 1987 one (there is always a crash somewhere...)

The New Economics Foundation was intended, not so much as a think-tank, but as a permanent secretariat for TOES (The Other Economic Summit), and regarded those counter-summits as the main purpose of its existence for the first few years.

During those years, the first TOES speakers were beginning to find their way into the mainstream. Professor David Pearce became advisor to Environment Secretary Chris Patten, Jose Lutzenberger became Brazilian environment minister, and a whole string of ideas shifted almost without anyone noticing into the mainstream as well – green taxation, ethical investment, alternative economic indicators, became almost conventional. Community banks sprouted all over the world, apart from the UK.

The problem with a ‘new economics’ is that it was always hard to pin down, though nef’s first director Paul Ekins edited together the contributions to TOES as The Living Economy (1986). “I do not believe that such an economics yet exists,” said the Chilean radical economist Manfred Max-Neef at the original TOES conference in 1984.

George McRobie, soon to be nef chair, was more optimistic: “It is a formidable agenda for a massive advance in human welfare and wealth, in the widest sense of the word, worldwide. With apologies to my old friend, Fritz Schumacher, it is not a small agenda, but it is beautiful. It is also becoming increasingly obvious that it is possible.”

Part of the problem was that the old assumptions had power and money behind them. They still do.

As the years went by, nef has had only five directors (Ekins, Hatfield, Mayo, Wallace and Stears), and the last three have covered the whole period from 1992 to 2016. But nef has also managed to lead the agenda on a range of issues at different times – even being voted Think Tank of the Year in 2002.

Those issues include developing the concept of social auditing, including building a whole social audit department inside the Body Shop. They included developing alternative social indicators alongside KPMG. .

They included various important interventions in the debate on better economic measures – including the UK version of Cobb and Daly’s Index of Sustainable Economic Welfare and the Happy Planet Index (downloaded over a million times around the world in 2006).

They included the UK launch of the time banks movement and co-production and the launch of UK community development finance institutions. It included the development of a range of ideas around local economics including Local Alchemy, BizFizz and LM3.

They included, more recently, a successful lobbying campaigns on Clone Town Britain and on the problem of fish depletion in European waters. It included a very great deal more besides.

The counter-summits continued too. In Munich in 1992, all the TOES organisers were arrested on the eve of the conference. In Naples in 1994, they were given a guard of honour by the mayor. And finally, in 1998 in Birmingham, Blair and Clinton asked to see nef director Ed Mayo and Jubilee 2000 co-ordinator Ann Pettifor (now a nef fellow) at the height of the summit.

Recent years have seen the emergence of the organisers network NEON and NEF Consulting. In fact, during those years, nef also became nearly the biggest think-tank in the UK (in terms of staff, though not in terms of income).

What comes next? Well, that is more difficult to predict - a whole range of thinktanks, from IPPR to the Royal Society of Arts, are now dedicated to re-thinking economics. Trickle down economics is dead, but not quite buried. For the agenda to develop in the mainstream, it is going to need to be challenging and detailed at the same time. It will also need the emphasis on practical tools which it has always carried and does again as part of the re-launch this week...

See my book Cancelled! on the Southern Railways disaster, now on sale for £1.99 (10p goes to Railway Benefit Fund).
Subscribe to this blog on email; send me a message with the word blogsubscribe to dcboyle@gmail.com. When you want to stop, you can email me the word unsubscribe