How to settle the Southern strike.. 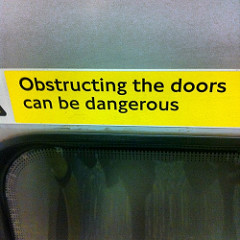 Twice in the last year or so, I’ve found myself having to intervene on the platforms of the London Underground to rescue older people from closing doors which were crushing them. On the second occasion, I was also shouted at for my pains by the platform staff for delaying the trains.

I hereby dedicate myself to obstructing the doors and causing delay where necessary. In fact, I dedicate this post to my friend Mike Harskin who first used the phrase (he hasn't been with us, I'm afraid, since August 1992).

I draw no conclusions from this anecdote about the current rail dispute, except to say this: an effective and efficient railway is not going to be one without human beings. Railways without human input are efficient only by bending passengers to their will, like an assembly line. It isn’t civilised.

But if this makes me sound as though I'm on the side of the RMT union, I am actually pretty cross with them. They seem to have snatched defeat (or at least compromise) from the jaws of victory by taking it out on their passengers for five days (yes, I know, the strike has been suspended) and providing the government and GTR managers with someone to blame for everything. Their boneheaded failure to campaign seems to me to have let down their own courageous and long-suffering staff (see my blog post ‘Lions Led By Donkeys’).

As if on cue, I had a long letter from my local MP yesterday (Nick Herbert). He got most of his interpretations right and was right about the urgent need for rail investment in the south east. But he was so horribly wrong about the last few months – revealing that he has only really been talking to officials and GTR managers (the besetting fault of so many politicians).

He still thinks the disruption has been caused over the last four months by unofficial industrial action, the mythical ‘sicknote strike’. There is no evidence for that and I challenge Nick to produce some.

In fact, every absence by GTR staff since April has had to be covered by a doctor’s note. The rising sickness in May was linked to the extreme stress that the frontline staff were under, facing furious passengers, dangerous platforms and a dearth of information, day in day out.

The failure to understand this is pretty fundamental. If the company had not blamed its staff, despite their huge loyalty and good humoured efforts to protect passengers, then there might have been enough trust to avoid the strike.

GTR has a great deal to answer for, but then so do the politicians. Both have been motivated over recent years largely by a misplaced terror of the rail unions – thereby bringing about the very situation they feared. Most of the RMT activists I’ve met actually voted for Nick Herbert or this colleagues. They have been driven into the arms of an unimaginative, plodding union – which has given the government precisely the excuse they need to avoid facing reality.

So what can be done? Well, I do give GTR managers credit. It was their inflexibility in the face of the April strike which kickstarted the present crisis. But their flexibility this time round may just save the day – and I pay tribute to them for that. They owed it to their staff, but it has taken guts to move as far as they have.

Both sides are now meeting round the table at ACAS and GTR has come some way towards their opponents. It is now time for both sides to make one more compromise. Can I suggest what it might be? I hardly dare do so as a fundamental outsider, but there is one. It is this:

1. That the guards retain their normal safety role to signal to the driver, but the driver actually closes the doors.

2. That there should be unusual circumstances agreed by both sides (GTR has already agreed to this) whereby trains can be run with just a driver.

3. GTR to agree to put extra resources into the control room at Three Bridges and commit to always running the last timetabled service home (there’s got to be something in it for the passengers in this...).

It sounds legalistic, and it is – but both sides can save face and we can get on with getting Southern running again.

It is true that GTR is not as close as it needs to be to implementing their driver-only plans. Many of the Southern stations are still not licenced as safe by the Office of Rail and Road (the regulator) and the Department for Transport are said to be providing the resources to fight them about it. I don't know if this rumour is true - so perhaps anyone who knows could confirm or deny it.

At the same time, the government urgently needs to look at the fundamental causes of this mess – a railway that doesn’t function which nobody can rely on, which is undermining the local economy and creating polluting traffic jams. A railway that is making people ill, staff and passengers alike.

Once the RMT make this compromise, the government will have no excuse for failing to tackle the basic problem.

I’ve talked about the failures of contracting culture (see my book Cancelled!), and how little we want to strengthen Whitehall’s disastrously inflexible hold over the running of the railway – the whole GTR affair is a terrifying vision of what rail nationalisation would be like – but there is a problem. It is called monopoly and giantism. The two go together, as they say, like a horse and carriage.

For the franchising system to work at all, there has to be enough potential companies to contract, and at the moment there are only a handful. The government will need to provide new entrants with the resources to bid and some of those new entrants need to be mutuals.

People keep on asking my opinion what the fundamental solution is to the GTR/Go Ahead mess. It is that Southern Railways should be run by a mutual, owned by the staff. Like Waitrose or Welsh Water.

GTR won’t like it. The RMT won’t like it (it complicates the class war). Both of these facts commend the solution to me. In fact, it seems to me that the frontline staff who have so courageously borne the brunt of the crisis deserve to be the owners of the company running the next franchise.


See my book Cancelled! on the Southern Railways disaster, now on sale for £1.99 (10p goes to Railway Benefit Fund). One of my correspondents suggests that we all buy the paperback version (£4.75) and leave copies on the trains...
Subscribe to this blog on email; send me a message with the word blogsubscribe to dcboyle@gmail.com. When you want to stop, you can email me the word unsubscribe

Another interesting blog David thank you.

I have some questions about your points.

Re. Point 1. If both guard and driver are involved in the dispatch process who would be legally responsible if a 'trap and drag' incident occurred. If a driver closed the doors after the guard had viewed the platform and given the right away two bells would the driver then be expected to examine his 12 monitors again to ensure no passengers were trapped before taking power? I could see that this would add to safety as there would be a double check, but where would responsibility finally lie? This question is a very serious one as drivers risk protection and imprisonment for mistakes.

Re point 2. Have GTR agreed that there should be a frontline staff/union input into what constitutes 'exceptional circumstances' and that these should not include just failing to employ enough staff to run the franchise.

Re. Point 3. One of the problems with cancellation of last, or last connecting, service is I believe that local managers have lost the right to incentivise a small amount of overtime by adding some extra paid time to it. For example - a last coastway train is standing at Brighton being held by control to connect with a train from London. The London train is late and the only way to hold and run the coastway connecting service is for the crew to work overtime in order to get the local train back to its depot after the trip. Let's say the overtime required is 34 minutes. In the past a local manager could offer the crew 2 hours overtime to reward them for getting home later in the early hours. This meant that the service would run and at the same time created goodwill. I think that is totally reasonable but senior management have vetoed that flexibility without negotiation. Staff resent this (so do local managers!) and many crews will refuse to run the service and go home at their scheduled time. Result - resentful passengers stuck at brighton late at night. Cause (IMHO) pathetically bad penny pinching and inflexible management showing contempt for passengers and workforce. (I have this account from a retired middle-manager by the way so I think it is probably true - it fits all we know about the ineptness of GTR).

I totally agree with you that in a safety critical industry it is vital to incorporate the wisdom the frontline staff into decision making to escape this absurd confrontational approach of both management and unions - which frustrates and endangers everybody. A co-ownership participative model such as John Lewis would be ideal in my view. Could you tell us more about the train company that you refer to?

Keep up the woodwork.

Keeping a second man on the train.
Since the DfT instigated this conflict and are pulling GTRs strings as their management franchise, the DfT has to guarantee a second safety critical person on the train into the next franchises as Claire Perry, the previous rail minister, said before she resigned or was pushed from her post. The loss of some routes is expected ie Brighton mainline north of Gatwick and other outer London lines with fully staffed station platforms. Meanwhile as the ACAS talks continue GTR sent an uncompromising letter to their drivers stating that after August 22 DOO will be increasingly phased in, and after that the South Coast. Hope you enjoyed your holiday or still are.