The V campaign: when Britain spoke confidently to continental Europe 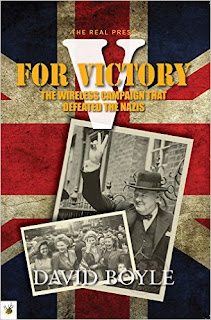 Today (6 June) marks the 75th anniversary of an important moment in the history of British relations with Europe - a moment when the UK spoke confidently, and without complex spin, to the people of the continent. And were listened to with trust.

Just after 11pm, on 6 June 1941, the BBC's European Service English language network broadcast the first programme in their V for Victory campaign. The speaker announced himself as Colonel Britton, and his identity was a closely guarded secret for the rest of the war. He was actually Douglas Ritchie, the BBC deputy European news editor, and the broadcasts were his idea.

For nearly a year, Colonel Britton broadcast into what was then, in effect, the silence of occupied Europe - there was at that stage no sign of a resistance movement - in the hope that encouraging small acts of resistance might one day encourage something more.

Week in, week out, he read out the letters he was receiving (the BBC still received letters from occupied Europe), encouraged people to chalk V signs everywhere, named the collaborators and gave out their addresses and encouraged those taken to the German arms factories to work slower.

And every week, his broadcast was announced with the beat of V in morse code on a drum - Ritchie's colleague John Rayner (of the Daily Express) noticed that this was also the opening bars of Beethoven's Fifth, and that became drafted in to the propaganda war as well.

The V campaign was taken up by Churchill and de Gaulle, who both used the V gesture for the rest of their political careers. It strengthened the sense of self-esteem in occupied Europe. It even led Goebbels into running his own V campaign, claiming that the Nazis had invented it - a sure sign of success.

It also underpinned - amidst great controversy - the huge and largely forgotten success of the European Service, under its maverick director Noel Newsome. By the end of the war, Europeans were turning to radio from London - nominally from the BBC but actually independent of them since 1941 - every day in search of the truth.

As many as 15 million Germans listened in to London every day, by the end of the war, though doing so carried a death sentence.

Why was the V campaign controversial? Because it sidestepped the almighty turf war in Whitehall about who should control communications to Europe. Because many in the establishment were worried about encouraging subversion and sabotage over the airwaves, and were particularly nervous about encouraging workers in Nazi factories to go slower - in case it caught on among the militant railway workers in the UK.

The successful model of broadcasting across Europe in 30 languages nearly survived the war. Newsome had got the Americans and other European nations to back a plan that Radio Luxembourg would carry on the work of the European Service in this way. But the last act of the wartime coalition in 1945 was to torpedo the idea.

Was it because they didn't know what to say to continental Europe, or that they distrusted the moral leadership they had developed through broadcasting so successfully from London? Or was it that they just felt uncomfortable in Europe and were desperate to return to splendid UK isolation? Seven decades later, we appear to be at a similar crossroads.

Read more in my new book V for Victory, which provides the full story of one of the most successful radio campaigns ever waged (it only costs £1.99 on kindle!).

Subscribe to this blog on email; send me a message with the word blogsubscribe to dcboyle@gmail.com. When you want to stop, you can email me the word unsubscribe.
Posted by David Boyle at 08:07