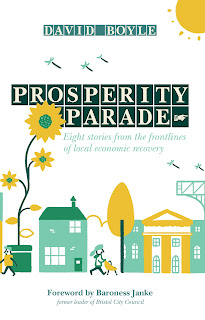 What with Facebook and Google and Uber, you might be forgiven for thinking we were living in a great entrepreneurial age.

It is true that, in the UK, the number of startup companies rises every year – though the growth in London completely dwarfs everywhere else.

But in the USA, the number of successful company launches has been in decline now for fifteen years, and – since the UK always seems to copy the least attractive economic trends in the USA sooner or later – I’m sure the same will happen to us.

The academic researchers, and the Federal Reserve, who came to this conclusion have no idea why it is happening, but the Fortune writer and doyen of American business journalists Geoff Colvin put it like this:


"What happened? The academics don’t know and are trying to find out. Regardless of the explanation, one can’t help imagining that maybe these trends are contributing to several intractable problems in the U.S. economy: stagnating wages, long-term unemployment, low productivity growth, and overvalued unicorns as VCs compete for ever fewer high-growth startups. There’s no firm evidence yet. But to understand today’s business dynamics, let’s start by accepting this disorienting reality: At least for now, the 21st-century corporation is actually less likely to be a high-growth newcomer..."

I can also hazard a guess. The semi-monopolies have so many privileges they are harder to challenge. The international corporates, and especially those operating online, have huge tax privileges (they don’t pay it). The banks and unicorns and angels are scrabbling over a tiny few start-ups they think could scale up and may actually be getting in the way.But there is one other reason, and it appeals to me because I have been hailing a new entrepreneurial age: that the new entrepreneurs, and their new start-ups, don’t look like the old ones. They defy categorisation and may operate entirely outside the data.

Certainly there is little or no awareness of the new enterprises in cities, and the new entrepreneurs that are busting out of accepted political categories too.

The new divide is between those who want to wait, patiently or impatiently, for the Chinese to invest or until they clutch the national reins of government and launch a new regeneration programme to kickstart the local economy of our cities – and those who want to get on and do something themselves.

That means seeking out what resources are underused, whether it is people, ideas, money flowing through the local economy, or local energy or other kinds of local enterprise, and using them to meet local needs. It means taking back some responsibility for shaping local prosperity.

Together with my colleagues at the New Weather thinktank, I have been travelling around the country to find out, and then tell the stories, about some of this new generation of local entrepreneurs. And that was what they had in common: they didn’t want to wait.

They were not quite the conventional model of entrepreneurs, if indeed entrepreneurs ever really fell into that category. They were more along the lines that Anita Roddick used in her famous definition. Entrepreneurs, she said, are people who can imagine the world differently. Hence perhaps the failure of this kind of enterprise to register in the accepted categories of the Federal Reserve.

That is not to imply that the new generation of local enterprises are not interested in making a profit. Or that they don’t need to in order to reshape the rules of the local economic game. What they have in common is a denial that there is only a national economy, and all they have to do is wait for the tide to come in.

But it is strange, on the face of it, that national policy-makers haven’t noticed what is happening, even as power is devolved to Manchester (the next working day after Easter).

There are two main reasons, it seems to me, why national politicians – and even many local politicians – don’t understand this new enterprise revolution that is emerging.

First, they don’t measure it. They collect little or no data about where money flows through cities or about local enterprise, its health or its needs.

Stories are the raw materials that politicians use, to think, communicate and take decisions. Without them, they don’t see things. That is why we have been meeting the new entrepreneurs so that we can tell their stories – of big ideas and hurdles and re-thought plans and frustration and success and the difference it can make.

Not as dry thinktank case studies, but to tell their tales in depth. The result is a book of eight stories, Prosperity Parade, funded by the Barrow Cadbury Trust, and a showcase of what is really going on at the front line of economic innovation. It is available as a free pdf here and on kindle here. I hope that politicians, local and national, will not just read them – that they’ll go on to tell them too.
Subscribe to this blog on email; send me a message with the word blogsubscribe to dcboyle@gmail.com. When you want to stop, you can email me the word unsubscribe.