Will the real Alan Turing please stand up? 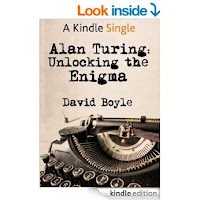 I have finally got round to watching The Imitation Game, and the acting is ferocious. Benedict Cumberbatch is completely convincing as Alan Turing and the whole business was extremely moving.

I felt I had to watch it last night - having so far avoided doing so - because today I am taking part in the London History Festival and sharing a stage with Sinclair McKay to talk about Turing and Bletchley. I was afraid somebody would ask me about the film.

I've been writing about Turing and Enigma for nearly two years now and I didn't want the film to get in the way. But I needn't have worried. The film was so detached from what really happened that it might have been about other events, based loosely around the characters involved.

I always find dramatisations of naval history frustrating, because there usually includes lots of very familiar clips that I know perfectly well refer to another time or place, and certainly another ship. Why was the burning of the Graf Spee included in a clip on the later stages of the Battle of the Atlantic, for example?  Why did we get so many mock-ups of what appeared to be an American battleship?

But you have to expect this kind of thing,  What The Imitation Game does is to squeeze the story of cracking naval Enigma into a format where the cast can be extremely limited, and as if the entire war was won by one individual. This is also frustrating, but it gets the gist across.

Where the film goes wrong is over the portrayal of Turing himself. My impression is that he was considerably more gregarious, popular and self-assured than he was portrayed here. I feel vindicated in this partly by his nephew 's new book The Prof and partly because he was sent to represent the British cryptographers to the USA after they came into the war, and I can't believe he would ever have been entrusted with such a mission if he was unable to handle himself in social situations.

But, then, I'm assured by one of my neighbours, whose father-in-law was in the room at the time, that Turing actually ended his engagement with Joan over the phone.  So who knows.

Either way, we are talking about Turing tonight, so do come along.  It is at Kensington Central Library at 7pm (24 Nov). Hope to see you there.