Time for a bit of economic archaeology 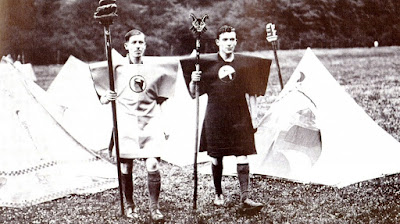 I have always been fascinated by those social movements that rise and fall, leave their mark permanently, and are then forgotten. I have had a soft spot for the 1920s movement Kibbo Kift as a result.

So imagine my surprise when I opened my Guardian last week and found a big feature about them, and their charismatic leader John Hargrave. I dropped everything and read through it immediately.

There are three reasons why I’m especially interested in this peculiar mixture of Scouting, Egyptology, outdoor ritual and back to the land.

First, because it was an early breakaway from the Boy Scouts (Hargrave had been a frustrated head of camping).

Second, because of their amazing sense of design. The logos look modern ever now, with just a hint of Art Deco about them.

Third, because Hargrave changed his mind – transforming Kibbo Kift overnight in 1929 into the militaristic Greenshirts, much more numerous than the Blackshirts, dedicated to changing the money system to prevent banks from creating money, in the way that they do now.

The article did not communicate all of this (this isn’t a criticism). But it is hard to quite recreate what Hargrave meant because, as D. H. Lawrence used to say, he spoke in a kind of sloganising gobbledegook.

It is also, in my book, not exactly ‘back to the land’, which is about growing things. Hargrave was more part of the conservation movement. He wasn’t interested in crops, just – in that rather Germanic, Romantic way – that it was important to be outside.

Being outside is important, but not as a relief from modern, urban life, it seems to me – but as a way of reforming it.

Why am I writing this? Because it seems to me extraordinary that we allow ourselves to forget these movements, because they carry within them important truths which have to be reinvented all over again by the next generation. Especially, it seems to me, in economics.

I hereby dedicate myself to the task of economic archaeology – the exhuming of forgotten innovations which our economics establishment was just too boneheaded to notice or discuss at the time.