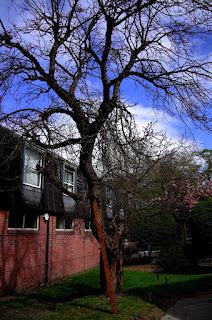 Isn't it peculiar that, the more the government machine talks about 'evidence-based' policy, and the more the political parties follow suit, the more technocratic they become.

Find out more in my original attempt to intervene in the debate about evidence-based policy (if there is one) in my book The Tyranny of Numbers.

There is now a great deal of evidence about the impact of trees on the lives of people living in cities, mainly from Dutch research (no coincidence there since the Netherlands is probably the most densely populated nation in Europe). This is especially so for people with mental health issues. Trees keep people calm, help them to recover from illness faster. It isn't just a nice but irrelevant aspect of public policy: people need green space around them to stay sane.

One glance at the rising concrete blocks around East Croydon is enough to demonstrate how little this means to policy-makers. Where are the children going to play? Where are people going to see anything green?

The sad truth is that, for all their talk of evidence-based policy, many government institutions seem stuck in the technocratic 1940s, when your average architect swallowed Le Corbusier's mantra that a house is a machine for living in and little more.  We are building in the next generation of soulless suburbs and the mental difficulties that will inevitably follow.

Yet when you see a tree that is really ancient, there is a kind of frisson - a connection with the past - that goes way beyond the evidence.  Take for example the ancient mulberry tree in Bethnal Green (thank you, Sally!).  This is what the website Spitalfields Life says:

"Imported from Persia by James I in the sixteenth century, it is more than five hundred years old and once served to feed the silkworms cultivated by local weavers. The Mulberry originally grew in the grounds of Bishop Bonner’s Palace that stood on this site and an inkwell in the museum of the Royal London Hospital, made in 1915 from a bough, has a brass plate engraved with the sardonic yarn that the Bishop sat beneath it to enjoy shelter in the cool of the evening while deciding which heretics to execute. My visit was a poignant occasion since the Mulberry stands today in the grounds of the London Chest Hospital which opened in 1855 and closed forever last April prior to being put up for sale by the National Health Service in advance of redevelopment..."

Ancient trees have a kind of mystical quality about them, connecting us - via a living thing - to the distant past.

I have no problem with institutions being closed, if they are the wrong ones. But institutions are living things, and they make civilisation possible, in both cases just like trees. And neither trees not institutions are really safe in the myopic and data-driven worlds of the NHS estate departments.