Diverse money: an idea whose time has come 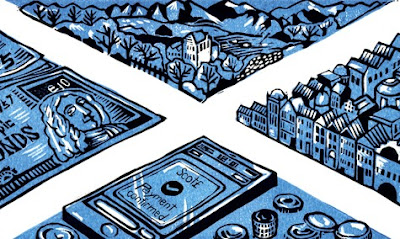 There is a great deal of unwarranted glee in Lib Dem circles that Jeremy Corbyn will drive disaffected Labour members into their ranks.  Quite the reverse, I would say: Corbyn threatens the Lib Dems in three ways.

First, because we know that people need to feel safe about the opposition  before they dare to vote for outsiders. Second, because he risks trapping the party forever in the cul-de-sac of split-the-difference centre politics. Third, because the handful of ideas he has brought now into the mainstream, and which are important, may be undermined as a result.

I count two of these (more on them later): handing over responsibility for energy generation to cities (as in Sweden) and providing a publicly created money supply for infrastructure (as Iceland is discussing).

The second idea is also backed by mainstream commentators like Adair Turner and Martin Wolf, and it certainly makes sense. So far, it has been bogged down in questions about whether it is legal, though quantitative easing is basically the same thing - just funnelled into bankers' bonuses.

Which is why the detailed proposal about a parallel currency for Scotland, put together by my old colleagues at the New Economics Foundation, is so important.

Their proposal cleverly brings together the idea of publicly created money (the rest is created with interest attached by the banks), issued via a dividend to every individual, with the idea of parallel currencies which are able to seep into parts of the economy which big currencies tend to shun.  This is how they describe the features of the ScotPound:

A new kind of money, a small dividend and a new payments system independent of the big banks, all in one. It is radical - it isn't backed by Corbyn, and (most important perhaps) it doesn't affect Scotland's commitment to the pound sterling.

But it is the publicly created dividend that is, in some ways, the most interesting feature. There are other ways of injecting spending power into the economy - via green infrastructure, for example - but this option may offer the best way of reaching the parts of the economy that are not currently reached.

And because it is in a parallel currency, it shouldn't be inflationary. When half of the £62bn pounds in circulation are stashed away abroad, it does make sense to have a more diverse system.

Mainstream economists hate the whole idea of parallel currencies. They don't really understand anything that undermines the bottom line, but the age of postmodernism is here (it's nearly over, in fact), and multiple bottom lines - diverse systems and points of view - are the stuff of postmodernity.

Diverse systems are also more resilient.  So I hope we don't abandon the idea of a ScotPound entirely to the SNP.