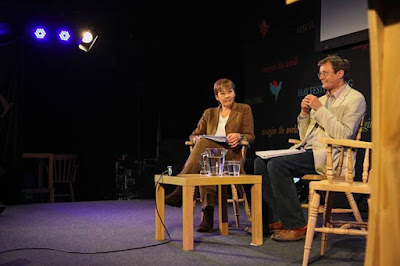 Ebenezer Howard, the garden city pioneer, used to say that – if something was worth doing – you would be “as old as Methusalah” if you waited for the government to do it.

This may not be borne out by the frenetic activity in Whitehall at the moment, as the new government appears to be attempting to achieve everything in their first month of office. In practice, government being what it is – the peculiar UK obsession with graphs – this maybe activity in inverse proportion to what they actually achieve. But, hey, maybe I’ve become cynical.

This is a way of introducing some thoughts after Andrew Simms, Caroline Lucas and I talked in public with some quite a large audience, about local economics and inter-party collaboration, at the Hay Festival on Friday.

You can see a report of the event here, and I believe a recording shortly here (but not sure).  It was incidentally organised by the New Weather Institute.

Our engaged reception has made me think. People were so hungry for the idea, not just of talking about big economic and political ideas in public – rather than in the truncated, bowlderised form you tend to get these discussions during a general election – but of political parties working closely together to make things happen now.

Even if they are out of office. Even if they only have a handful of MPs, and even the Lib Dem and Green parties combined only have nine.

We talked about a number of things in the area of local economics which might be achievable, particularly the sub-division of the dysfunctional RBS – still in government ownership – to form the nucleus of a new sector of local lenders.

But there was a palpable demand for politicians to work more closely together and a more strident demand on us, the speakers, to set out how it could be done. So here are my four suggestions:

1. Set aside campaigning. Take the pledge. No more pointless, defeatist, UK-style ‘campaigning' where the objective is to cause a stir, ‘raise concern’, make the other side look bad and fail – in fact, failure may be the ultimate objective (for political reasons). I’m too old now for that: I want us to make change happen by forging unusual alliances, sometimes with people we might otherwise disapprove of, in order to make things happen. No more holier-than-thou, no more untouchables, the besetting sin of the UK left. Engage the enemy more closely, as Nelson might say (I'm not, of course, against campaigning in principle, just the way we tend to do it here, with no intention of winning).

2. Change the tone of voice. The UK political system encourages competition rather than collaboration. In fact, it discourages all the political skills apart from doing nothing for decades then riding roughshod over everyone else. We need to develop a tone of voice that encourages people from other, rival parties to work together for specific objectives. That requires us to talk differently in public about them, and that in turn requires us to think differently in private about them too.

3. Focus on health and prosperity. I can’t see how any political force can aspire to government without setting out a different way of achieving health and prosperity in a more challenging way – the failure of Labour and Lib Dems to do so is part of the explanation for their defeat. Why should we let the other side get away with claiming that they can uniquely provide health and prosperity, while we just argue about how it should be distributed. Not successful. Time to go to the heart of the matter, because the same applies also to all political objectives - we need to show how they create prosperity or health. Raise the stakes, in other words.

4. Get on and act. Nothing will build the trust we need across the various political divides better than working together and making things happen. We just have to start, setting aside the belittling rhetoric of the other parties, letting them question our motives without doing it back. Because being positive has huge public power, whereas moaning on about marginal slights is a sign of weakness and irrelevance. In the end, we make co-operation work by doing stuff together.

I would suggest that, for those of us who will stay Liberals no matter what, but still want to work together with Greens, for example, that there is one issue we might tackle first.

I think we should work, together and independently, to end the scandal of commercial confidentiality in public services. They are public, paid for by our money, and it is really indefensible that the operators should be allowed to hide details of their contracts.

We can change this by legislation, but that seems unlikely. We could also change it by taking control of local authorities and ending it by changing the contracts. That is what we should do, and I’m hoping the leadership of both parties might commit to this. It's a small start...