The remaining mystery of the Christmas Truce 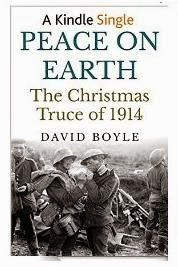 It is strange to think that, on the centenary of the famous 1914 Christmas Truce - in only a few weeks time - that there will be nobody left alive who remembers one of the oddest and most spontaneous events of the twentieth century.

I've always been fascinated by the truce.  My favourite novelist Henry Williamson was there and it changed his life - disastrously so, in some ways, given that he came to believe that the soldier he had met from the other side had been Hitler.

There are a few difficulties involved in writing about it now, exactly a century on - as I have been doing.

The first is to find your way back into the state of mind at the time, to understand what it meant then - before the knowledge of poison gas, the Somme, the war poets, and so many of the horrors.

The second is to draw some conclusions about it.  It was dreamlike for those who took part, and - on the English and German sides at least - not in any way a pacifist demonstration.  But I'm not sure we would have looked so kindly on a Christmas Truce if it had happened after an invasion of this country in 1940.

The third is to identify the continuing mystery.

That is pretty clear to me now.  For the French and Germans, the truce was unmentionable until recent years, so this is in some ways new to them.  For us, there are literally hundreds of eye-witness accounts and more come to light all the time.

No, the peculiar element for me is the complete lack of records remaining from the senior officers.  The commander-in-chief Sir John French wrote in his autobiography later:

“When this was reported to me, I issued immediate orders to prevent any recurrence of such conduct, and called the local commanders to strict account, which resulted in a great deal of trouble..."

The mystery, for me, is that almost no record remains of that 'great deal of trouble'.  But it is a clue to the real meaning of the truce, and what actually happened.  I explain what I mean in my new ebook Peace on Earth: The Christmas Truce of 1914, which was published yesterday (it costs £1.99 and can be downloaded onto PCs too!).