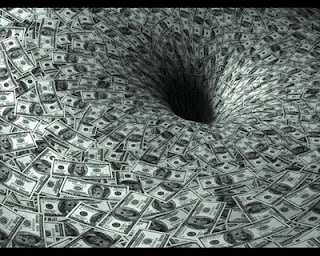 I've been mulling over the big items in the Autumn Statement and have come to the conclusion that the establishment have very little sense of how economics actually works.

I suppose they are muddled by the politicial rhetoric that house prices rise because there aren't enough homes - which of course they do, somewhat.  But it isn't the main reason, and it isn't clear to me why Whitehall doesn't understand this.

If you thought the main problem was too few homes - and there are too few homes - then perhaps you might imagine that lowering stamp duty would tackle the problem.  But even then, I can't see how.

The reason house prices rise is that there is an infinite amount of money flooding into the system, initially via London - from unequal salaries and foreign investors taking the place of limitless mortgages.  The prices rise to meet what is just achievable for enough of those who can buy.

So lowering stamp duty will give a breathing space for a few months before the prices rise to fill the gap.  Any other wheeze to make prices seem temporarily lower will have the same effect - whether it is subsidising mortgage deposits or 40-year mortgage terms.  The prices will rise to fill the gap.  They always do when there is so much money in search of property, as I explain in my book Broke.

The same goes for the £15 billion largely wasted on trunk road building.  It will bring a temporary relief, but then the suppressed demand will simply flood in and fill the gap again.

In both cases, we will be back where we started, but taxpayers will be £15bn (roads) and £800m (stamp duty) poorer.

Yes, I know I'm cross that my stamp duty was paid in full only three months ago.  But it's more than that.

I understand the drama that is being played out pre-election.  But even so, why do we have to keep shovelling money into these huge craters, while allowing the basic problem to continue from generation to generation?  Why don't we try and solve the problems in a sustainable way?  Why don't senior politicians understand suppressed demand?

And speaking of sustainability, the Autumn Statement just happens to coincide with the revelation that - once again - we are living through the warmest year on record.  Does nobody look any further than a few months ahead?  Or do they really want their political obituary to damn them with the faint praise that they made house prices - the rack on which we eke out our indentured servitude - seem to dip for a few months?

Well, it looks like that the saying which the UK property owning middle classes love is "apres moi le deluge".

You may also have missed "Tory pensioner bonds":


«You’ve planned your retirement, you’ve planned a level of income based on savings and on interest and then suddenly interest rates are at a completely historically unprecedented level. And there’s nothing you can do about it.
“That is why the government has stepped in.”
The pensioner bonds, first announced in the Budget in March, will be available to buy in January and will operate as one-year and three-year fixed term investments. Some 11 million savers over the age of 65 will be eligible to invest up to £10,000 in both the one and three year bonds.
But the Treasury has capped the total savings pot at £10 billion. Once this level of investments has been reached, no further bonds will be sold.»

That given the difference between 0.5% and 4% the government is giving a £350m per year handout to target Tory voters.

I would not be an optimist overall...