Come to think of it, whatever happened to England? 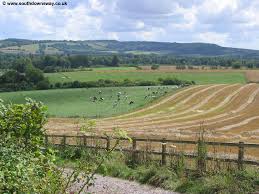 I lived in Crystal Palace, on a hill in south London, for more than half my life.  Now I don't.  As threatened during July, I've moved into a very English small town, nestling in the South Downs, and I have no regrets.

But I am slightly flummoxed and I thought I would share this perspective.  Maybe one of you might enlighten me.

My town is outside the commuter belt, one of the advantages of being impossible to commute from, and it is in some ways a step back into a bygone age.  People are patient and polite in the street.  There are four banks in the thriving high street.  There is an effective and forward-thinking GP practice.  The local library is open six days a week.  There are more cubs, scouts and beavers than most people could count.

I sat in church on Sunday, marvelling at the full pews, the identically dressed, healthy-looking people on final salary pensions, the contingent in RAF uniform for Battle of Britain Sunday, saluting as we sang the national anthem.

I am staggered really that all the promises made to me about my adult life at my expensive independent school appear to have come to pass here.  And they seemed peculiarly old-fashioned even then, when I left in 1976.

But ironically, I get no feeling that this is a naturally conservative place.  There are green campaign groups, farmers markets, more solar panels than I've ever seen before.  It has more community activity than I've come across anywhere.  There is an arts festival and a literary festival.  It is a place that works.

It is certainly middle class but this is no stockbroker belt either.  It is also too friendly a place to be entirely complacent.  I had no idea such places, so overwhelmingly English, still existed.

I'm not saying that everywhere should be like this.  It would send some of my colleagues quite round the twist.  But there is something that makes me cross.

I ask myself the following questions.

How come there are sections of the nation that feel like this, when so much of the rest of us have to live with libraries that open for a few hours a couple of days a week, where the GP surgery is so overwhelmed that you can't get through to get an appointment, where the high street is struggling, and you have to take a couple of buses just to get to the nearest free cashpoint?

The answer I come up with, perhaps because I'm a Liberal, is that it is generations of poor government - of bone-headed conservatives with their economic experiments, of authoritarian, of unimaginative socialists packing people into concrete hutches, and of government by centralised lobotomy.

The real political division, at least since I left school, has not been between conventional right and left, but between an ideology that believes the rich should rule (pernicious and unEnglish) and an authoritarian rival which believes people should be forced into simple boxes to make them easier to process.

That exclusive choice has been the curse of the nation.

I also ask myself, as I did on Sunday, whether my fellow inhabitants realise how much on a knife-edge this civilisation is perching.

The economic trends threaten to sweep it away, as it is busy sweeping it away for the middle classes in most of the rest of the nation, perhaps rather faster in Scotland, depending on which way the vote goes this week.

Because the first defence against the corosion of what makes us civilised, before we can organise ourselves to do anything about it, is to understand what is happening.  May I humbly recommend my book on the subject: Broke: How to Survive the Middle Class Crisis?

How come there are sections of the nation that feel like this, when so much of the rest of us have to live with libraries that open for a few hours a couple of days a week, where the GP surgery is so overwhelmed that you can't get through to get an appointment, where the high street is struggling, and you have to take a couple of buses just to get to the nearest free cashpoint?