Look what happened to my grandparents' home 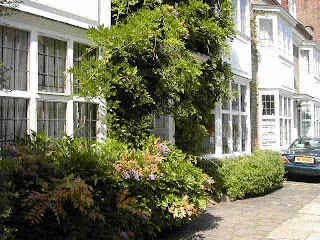 Just before the First World War, my great grand-parents bought a house in Mulberry Walk in Chelsea.  They were modest town houses but it was an attractive street, with its gas lamps and brick pavements - and it had to be to attract the right clientele given that Chelsea remained a raffish suburb full of artists and slums.

My great-grandfather was killed at the Battle of the Aisne, six weeks into the war, and my great-grandmother lived there for the rest of her life before dividing the house into flats for her daughters.  I don't remember her, but I know she was at my christening, almost certainly with her usual copy of Liberal News.

My own grandparents lived in the downstairs flat, and I remember it very well.  When they sold it in 1975, during one of those slumps in the property market that used to happen in the 1970s, it still had one of the original gas-lamps concreted into the back garden.  It gave the whole house a kind of Narnian air of magic for me.

By then, it was clearly going up in the world.  Sir Keith Joseph had lived there when he was health minister, but it was within a brisk walk of the World's End, and that was then a different world.

I don't come from a wealthy family by any means, or so I kept having to say when I wrote my book Broke: Who Killed the Middle Classes earlier this year.  But I did keep meeting people, while I was writing the book, who could no longer live anywhere near the neighbourhoods where they grew up.

We have become used, during the debates about gentrification, to believing that this was just a working class experience.  It isn't.  I live in a small house in Crystal Palace.  My children will not be able to afford to live here, any more than I can afford to live in Maida Vale where I grew up.

But even so, I got a bit of a shock when my cousin forwarded a copy of a property article (not online) which used Zoopla to describe Mulberry Walk as the 16th most expensive street in London.

The houses are all the same as those where my great-grandparents had walked down in 1914, but one of the double-fronted homes like they bought has just gone on the market for £15.75 million.

I don't know what they bought it for, and I expect my great-grandfather used the legacy from his father - he was on a Lieutenant-Colonel's salary.  It wasn't huge.  But even so.

The point I'm making here is that the experience of being priced out of your own neighbourhood is now so common in south east England, and other parts of the country, as to be almost ubiquitous.

It is a by-product of the ongoing 30-year housing bubble that we have endured and which is corroding the idea of a property-owning democracy - leaving us at the whims of landlords, and equally bubblesome rents, for all our lives.

In a generation's time, my own children will be staggered that I used to stay in Mulberry Walk most weeks.  It is a sad memorial for the middle class dream.  I'm pretty staggered now.
Posted by David Boyle at 12:02

If only they could have held on to it a little longer...:-)

Meanwhile, Google's algorithms tell it that the most appropriate ad to show next to this post is for a workshop on 'making money from property'....

Sorry David, but the perspective from the cheap seats is that you come from much posher family than you want to accept. The family's wealth has been deteriorating slowly over the last 60 years or so, and that what shapes your outlook.

There a millions of baby-boomers from poor backgrounds that are much better off than their parents, or grand parents. That is thanks high quality state education and, on the whole, a meritocracy in the workplace.

There is (still) significant redistribution of wealth built in to UK life. Moderately wealthy people have to run quite fast to hold their station. That's a good thing.

The worry is that today's kids' opportunities are being short-changed to fund the pensions of blue-rinse voters. The biggest UK policy disaster of the last century is surely the funding model for state pensions. Private pensions are a mere side-show.

bet you wish it was still in the family now