Now the food megacorps are too big to fail, are we heading for famine? 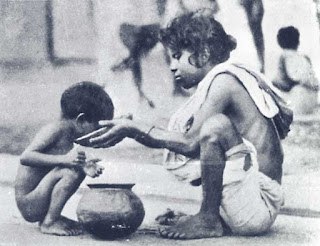 George Monbiot in the Guardian on Friday suggested a frightening prospect about the food inflation we are currently experiencing.

He says the problem has been that, like the banks, over-consolidation of the food industry – now that just four giant companies control 90 per cent of the world grain market – means that they are now ‘too big to fail’. To coin a phrase.

So what if they suddenly run into difficulties, as the big banks did in 2008? This is what he wrote:

“…. here’s what sends cold fear through those who study the global food system. In recent years, just as in finance during the 2000s, key nodes in the food system have swollen, their links have become stronger, business strategies have converged and synchronised, and the features that might impede systemic collapse (‘redundancy’, ‘modularity’, ‘circuit breakers’ and ‘backup systems’) have been stripped away, exposing the system to ‘globally contagious’ shocks.”

That is certainly a fearsome prospect, but it need to be linked with other thinking along similar lines.

Why exactly does over-consolidation lead to inflation? That is the question answered in one of the best newsletters around, by Matt Stoller on monopolies and called simply Big.

“Cantillon described what happens to class of people in the economy when a gold mine opened. Those near the mine, or with connections to the king, were the first to get access to the increased money supply. They bid up assets, and gain political power. Then as the gold moved into the rest of society, inflation in normal goods is the result. (Cantillon also noted that imports increase dramatically after a gold discovery, articulating a version of what is today known as ‘Dutch disease’ in economics.)

Last year, Stoller wrote that: “From railroads to plastic bags to semiconductors to ice cream, Wall Street and monopolists are creating shortages and exploiting them…”

That is spot on. Perhaps because the Liberal spirit has been dulled in the West, the main Liberal contribution to economics has been silent – a critique of monopoly power.

I am reminded of the research by the economist Amartya Sen, who studied the great Bengal Famine of 1943, in which 1.5 million people starved to death.

He found that there was no real shortage of food. It was just that people were no longer able to ‘command’ it.

It was too expensive or they had no right to it, or something. Similar problems applied in other famines from the Irish Potato Famine to the Bangladeshi famine more recently.

In other words, food shortages are a ‘populist’ lie; famine is about inflation and inequality – which also leads to inflation.

Sen also, it seems to me, pointed at the truth about a possible grassroots solution.

Ten years ago, I wrote a short, radical history of the UK allotments movement, and I found myself quoting the following letter to Country Life, written at the height of the first Dig for Victory campaign in September 1917:

“The assumption on which a national policy of agriculture is based seems to be that the food supply of the country depends chiefly on the large cultivators. One is not prepared to say that there is no truth in this. The five-hundred acre farm must yield a greater absolute percentage of the food supply than the little plots. Still, that is not all the truth… Some remarkable instances can be given to show how this works out practically. For example, a man who had cultivated forty rods of land, when he set about it was able to produce as much from twenty rods as he had done from forty rods.”

In other words, economies of scale don’t exist here. This approach, which has development experts on side, means supporting small farmers – because, in the end, attention to detail by committed small farmers will produce food, in the right places, at the right prices.

The discovery that small farmers out-produce big farmers was set out in the 1970s by Amartya Sen, but it actually isn’t a very new idea – as the letter to Country Life shows. The great radical William Cobbett noticed it when he was defending Horton Heath in Dorset from enclosure, noting that poor people could make poor land productive:

“The cottagers produced from their little bits, in food, for themselves, and in things to be sold at market, more than any neighbouring farm of 200 acres.

He noted that ten farms of a hundred acres each could produce more than one farm of a thousand acres. But it was a varied and diverse productivity, compared to the handful of products grown by the big farms. And there lies the source of the muddle. Monsanto and those like them don’t measure yield in the same way.

As I argued in my book The Human Element, the fundamental problem is that, although the West won the Cold War, we have adopted an increasingly Soviet economy ourselves – where an increasingly tiny elite, manage massive, technocratic monopolies, getting fat at the expense of ordinary people.

And which are in the end not capable of meeting people’s needs, for reasons we understood perfectly well back in 1989.

http://bit.ly/HowToBecomeAFreeanceWriter
Posted by David Boyle at 19:59