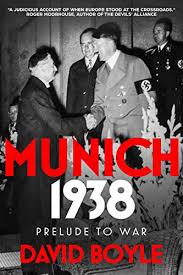 Those fascinated by the events of Munich eighty years ago will be aware that there are two books out which assume rather different interpretations. On is by the novelist Robert Harris, who has made no secret of his pro-Chamberlain views. The other one is by me, and Munich 1938 puts rather greater weight on the testimony of the pro-Czech writer Shiela Grant Duff than he does. 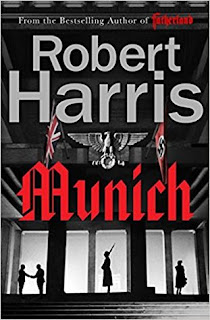 Now, it so happens that I have been sent a copy of the letter sent by Shiela to The Observer three decades ago, complaining about Robert Harris's opinions back then (thank you, Penelope). I reproduce it here without further comment:

In his monstrously misleading article as your guest political diarist, Robert Harris follows the now embedded myth that what was at stake at Munich was whether we should fight for the Czechs.

In fact, Chamberlain’s concern was, above all, to prevent the Czechs from fighting for themselves, and the French from honouring their solemn treaty obligation to go to their aid should Germany attack.

Munich was only the final scenario of a policy which the British government had been following more or less consciously since it came to power in 1935. The ‘wets’ in the Foreign Office were not those who opposed appeasement, as Robert Harris seems to think, but those who concealed – or perhaps honestly did not recognise – the true war aims of German policy and the iniquity of the Nazi regime.

The Czechoslovak government realised this from the start and, with greater foresight than ourselves, immediately began to fortify its frontier, build up its army and air force, augment its massive armaments industry and tried to develop the only international security system which would have prevented the German general staff from allowing Hitler to fight a war on two fronts – the Franco-Czech-Russian alliance.

Throughout the pre-war period, we not only refused to have anything to do with this allowed Hitler to “enter his backyard” in the Rhineland, thus depriving France of this demilitarised safety zone on a frontier, and positively encouraged him to look for German expansion in central Europe. Neither Austria nor the Sudetenland had ever formed part of Germany before.

What appalled Chamberlain was not the weakness of Czechoslovakia but its strength, in the dreadful fear that, if the Czechs defended themselves, we and the French would be drawn in. The Berchtesgaden-Godesberg meetings were concerned, not with preventing Hitler from invading Czechoslovakia, but making sure that the Czechs would neither defend their fortifications, nor use their army or air force.

At 2 o’clock in the morning of 22 September 1938, the British and French ministers aroused President Benes from his sleep to tell him that, if war broke out, not only would neither we nor the French intervene, but on the contrary, would hold the Czechs responsible for any catastrophe which followed. Benes surrendered. The German armies marched in, took possession of the tanks, planes, the guns, the armament factories, and turned them against us and the French on the Western front, defeating the French and expelling us from Europe just two years later.

“A triumph for all was best and most enlightened in British life”?

You can buy copies of Munich 1938 on kindle and as a paperback.

Subscribe to this blog on email, send me a message with the word 'subscribe' to dcboyle@gmail.com. See also: www.david-boyle.co.uk. By emailing you are agreeing to your personal details being stored and used to send you our latest blogs. We value your privacy and your personal details will not be shared with third parties. You can find more information in our Privacy Notice (www.therealpress.co.uk/privacy/).Get a free copy of my medieval Brexit thriller on pdf when you sign up for the newsletter of The Real Press.