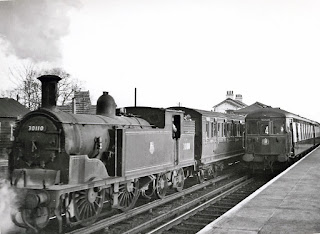 I am extremely grateful, not to say humbled, by the response to my book about the Southern crisis, Cancelled! I've also published this blog on the Real Press website.

Every day, I am getting feedback, information, insights - particularly from Southern's guards and drivers. I am blogging madly to keep up, though the mainstream media has finally now caught up with the story of the Southern trains which don't run - even if they have not yet grasped the full implications for other services, which I set out in the book. It has been a strange experience and I've tried to live up to it responsibly.

Since the book was published (mid-June), the company has now cancelled 341 trains a day in an attempt to get the rest to run on time. I write on the second day of this experiment - which has no end date, I notice - and the initial signs are not that good. The driver-only routes remain the least efficient, though the other routes have tended to be sacrificed for the driver-only ones. Nor does this bear out company claims that driver-only trains will improve the customer experience.

Last week, on one day, no less than three trains broke down and had to be taken out of service. This implies a more systematic failure which goes some way beyond staff sickness.

The present situation remains impossible - especially for those whose regular trains (and in some cases, whose regular routes) have been removed. I have therefore written an open letter to the owners of Govia Thameslink (GTR), to the Go Ahead group chairman Andrew Allner, asking him to intervene. You can read it here.

But my reason for writing now is to share a letter I received last week from a Southern train crew member, whose name I have removed, whose letter I reproduce below with his permission. I was fascinated to get it because it throws real light on the issue of why the chaos has happened, and what happens when the centralised management of an imperial company starts to treat their staff like young offenders.

"I've read your blog posts with interest. Your blog's very accurate and well researched. I would like to add something, a reason for so many cancellations. In the past, the resource managers (they look after train crew in the depots, making sure we are at work and try to find crew when people go sick or there's a shortage of staff) have actively tried to get people to work overtime when they don't have enough staff. Once the industrial dispute started, the resource managers were told not to offer overtime to anyone who had gone on strike. Staff could still phone up and ask for overtime, but work would not be offered. So overtime wasn't banned, but it wasn't offered.

"The way the railway works means sometimes staff levels are sufficient and sometimes they aren't. When there's a shortfall, the resource managers work hard to try and make sure all trains are covered, they phone us up, they encourage us to work, they remind us of favours they have done us in the past. A small amount of train crew volunteer to work as much overtime as possible, a small amount won't work any over time, and the majority of us volunteer occasionally if we want some extra money or will help out if possible if we are asked. The point is that, as soon as the resource managers stop asking, they don't have enough volunteers.

"Add the low morale, or no morale, because it's obvious GTR management hate train crews, and people are less inclined to want to work. Why am I going to work my only day off this week just to get shouted and sworn at numerous times, and help out a company who don't value what I've been doing for many years?

"Several months ago, I worked a long hour shift, I spent over eight hours on trains, every ten minutes an automatic announcement went off: 'bing bong, bing bong, bing bong'. The three bing bongs every ten minutes seriously annoyed people, then an announcement scrolled across the screens 'sorry for the cancellations... too many conductors off sick...'. So eight hours on trains with this message scrolling above my head, I have never been so depressed at work. Customers were tutting every time the three bing bongs interrupted them. I was constantly being asked about the unofficial strike action we were taking, I was accused of making passengers journeys a nightmare. I would have quit, but I have commitments..."

My own understanding is that the practice of discouraging overtime among those who had been on strike only lasted ten days at the end of April, and - as the driver says - does not amount to an overtime ban.

If you want to read or download Cancelled!, you can buy a pdf or epub version here, a kindle version here or a paperback version here. I'm giving 10p from every sale to the Rail Benefit Fund.

Things are happening, good, bad or indifferent only time will tell. Emergency time table, the downgrading of conductors put back to December and cracks appearing in the latest DfT statement. This have been mismanaged from the start. Network Rail haven't approved DOO on many routs and Drivers not been officially informed they will have to operate DOO along the coast, hence Aslef have lost 2 court cases about industrial action, they cannot strike until they have been told they have to work DOO where they haven't done before, even Drivers on current DOO routs are feeling the pressure with the increased passenger flow, line congestion and work load. They all want to keep the conductor on the train if not reinstate them back on some DOO. As for the Conductors they believe their role is essential dealing with many incidents from safety to customer care and a reassuring uniform presence. The passengers don't want to lose the conductors, the drivers want to support us they are just waiting their chance.

The mass cancellation has failed utterly. Trains still frequently have delays of more than an hour or are cancelled outright. The rate of such appears to be similar to before the cancellation began, although I have no statistics for this. And of course, the price of season tickets remains unchanged despite the reduction in service available.

I started with British Rail in 1971 & in 1976 became a Conductor/Guard, then you were captain of the ship, but even then management were lying, goods trains were increasingly becoming "fully fitted", & brake vans taken off the trains including the MGRs, the Guard riding in the rear cab, with B.R saying this will not effect the role of the Guard on the train, this of course was nonsense as a couple of years down the line no Guards on freight trains, then passenger trains, Bedford-Brighton, London metro services & so on. Southern Management have already said if the new role for On board supervisors should they not show up for work, late, sick etc the train will run DOO, as thats better for passengers!
So now you can see how they value the role of Conductor, OBS, NOT!