The stupidisation of Southern Water (and many others) 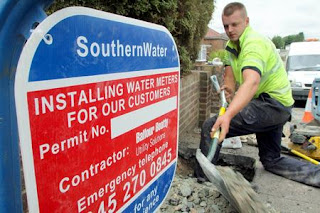 I moved house to Sussex nearly 18 months ago. None of the public services I used found it easy to grasp this idea. Some proved incompetent; some proved downright malevolent (TalkTalk springs to mind). But all of them, in their different ways, have managed to sort out the glitches, except one.

Southern Water. And their failure seems to me to have important lessons for services generally.

The problem stems from the fact that my new house boasts both a number and a name. I enrolled with Southern Water (not that I have much choice) using the number; though I didn't realise it at the time, they used the name.

I realised they had been worried about this when I started getting letters asking me who I was and addressed to the named house. I phoned them back, rather generously I thought, a couple of times to explain the situation but the letters kept coming. A month or so ago, they sent round a real person to seek out why there seemed to be only one water meter for two properties. I explained the situation to him. He grasped it immediately. But no change.

I began to worry about it when I started getting letters warning me that the named house would have its water cut off.

This letter led to a long conversation with their call centre when I insisted I should have a second letter accepting that they now understood that it is only one house, and withdrawing the threat. They promised.

Unfortunately, the next letter I received said that they had closed my account at the numbered address (now an 'uncharged property', apparently) and opened a new account for me at the named address.

I rang them back and told them that this was a lie and that lies tended to have serious consequences. Not a bit of it, I was told. Everything was fine, everything I had paid had been transferred and there would be no further problems.

After a flash of inspiration, I asked that my new named address should be changed so that it also has a number. This has to be done 'offshore', I gather.

Only a week later, I started getting bills for 34p at the numbered address to close my account, and letters asking me if I have moved elsewhere in the Southern area.

I should be furious about this waste of my time. I should be railing at the stupidity of the brontosaurus that is trying to make sense of my actually rather simple address. Actually, I've been feeling rather sorry for Southern. They have an IT system, managed offshore, which has rendered them unable to deal with variety - the fatal cause of extra costs identified by John Seddon, the system thinker.

All that investment has rendered their system extra stupid.

Perhaps my address doesn't matter, but think of the same effect repeated time after time - not just across Southern Water but every public service using the same kind of inflexible IT system. Think of the extra costs that we pay for. Think of the escalating costs involved in trying to treat a very simple variety virtually, when a more human, less controlled system would be able to deal with it instantly.

It is actually scandalous that governments and corporate suppliers should have been so misled. Unfortunately, they are still being misled.

"It is actually scandalous that governments and corporate suppliers should have been so misled. Unfortunately, they are still being misled"

No they haven’t. Outsourcing is sold as cost-cutting ( staff costs: hiring – training – pension are taken over by the outsourcing company) and headache removal.
It frees money to expand or pay the CEO more.
Thanks to technology , software is created so only data-entry skills and reciting a menu are required to do a job. It can be done cheaply overseas providing avenues of income for developing countries. This cost cutting has provided you with a cheap wardrobe thanks to Zara and Primark,ill-fitting underwear in M&S – trading lessons learned from the Opium Wars, and sport gear with Heritage names cheaply made in Asia.

Because outsourcing companies provide a service cheaply, due to downward monetary pressure and targets, staff is usually treated as a cog in a machine that can be replaced at any time, pay is low and work is a sanity and soul-sucking vortex where only people with – I can only do what I can do – attitude survive. Data breaches have cost Talk-Talk dear and the rot will continue. Crap service has to be delivered with a smile, bull-crap and terrible English. It’s a nightmare when your water company cuts your water but it can catastrophic when you call 111 trusting the system.

All the companies are doing it and encouraged to do so by consultants paid handsomely to find legal ways to save money. It’s going to continue and accelerate now that robotisation is coming.

The state was supposed to smell the roses and push the skills to deal with the future but thanks to greed, shortermism, politics, class snobbery and since it can’t stop financial extraction by Wall Street and friends, it is left with more cost cutting, foreign workers to fight inflation and begging money from overseas to cut the deficit.

When cheap labour overseas becomes “ not worth it “, then the tide will turn. People at the top, are usually insulated from the vagaries resulting from their dogma and policies until they feel the foundation of their tower crumble under their feet or they see heads on pikes, whichever comes first.