The stupidisation of public services 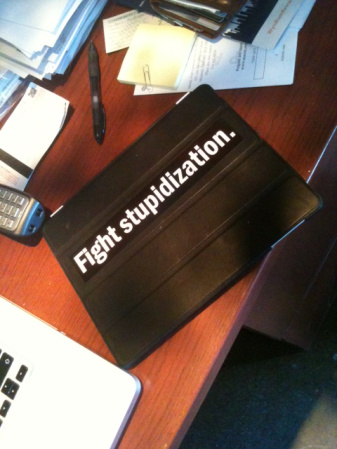 I don't know who else had this experience last week, listening to David Miliband on the Today programme, of feeling a sort of nostalgia for the man.  There was something about his confidence and relaxed delivery which contrasted rather well with his brother's rather strained, slightly wheedling tone of voice.

For just a moment, I said to myself that Ed Miliband's attempt to challenge his brother's right to the leadership of the Labour Party had robbed the nation of a competent politician.

This did pass after I thought about it.  The great problem, if David not Ed had been preparing for a general election as leader of the opposition, would be pretty simple: he would still be leader of the Labour Party, an organisation without ideology and apparently - at least in government - without much in the way of belief.

I realise that the Labour Party doesn't see it this way.  They believe one thing in government and a completely different set of things in opposition, and they barely relate to each other at all.  It is a peculiar, value-free institution, which sort of spreads forgetfulness about itself.  Rather like the pain of childbirth.

So as I drove along, the voice of David M. echoing away in my head, it took me only about five minutes to remember that we endured 13 years of a Labour government presided over by a man who agreed with the richest and most powerful person in any given situation - this is known in Labourspeak as 'being realistic'.

He then handed over to a centralising control freak who had presided over the de-regulation of finance.

Which brings me to the point of this post: the news about the failures of the Sheffield police, during that same period, to investigate the sexual exploitation of underage girls - which turns out to have been because central targets were dictating that the priorities were burglary and car crime.

None of the reports of this have begun to make these links.  The reason for the police failure was clearly numerical targets from the centre.  It was the same reason why old people were abused in Mid Staffs Hospital in the same period.

In fact, despite the original coalition rhetoric about this, we have not yet grasped how much public services were hollowed out during the Blair/Brown years - how much they were rendered incompetent, unresponsive, inflexible, and probably much more expensive as a result.

I have argued also that the narrowing of deliverables in contracting out contracts may be behind the bizarre rises in A&E attendances too.

And don't think I'm letting the coalition off the hook here.  They came into office determined to rid Whitehall of targets, but had no real understanding of why or how or what to replace them with, and consequently have failed to really make the shift - and failed to build this narrative.

This is a pity because it seems to me that both Milibands need to be held to account for their role in the Stupidisation of UK services.  I realise that isn't a word - or it wasn't until I coined it just now (I now see I didn;t coin it, hence the photo here, which is from a campaign in the USA).  I suspect that Mid Staffs and the Sheffield police are just the tips of many icebergs, and that they still float unnoticed - an explanation of a great deal that has happened since.

So when Labour accuses the coalition of undermining public services, just remember that there is another side to this argument, and not even the coalition parties are making it - because they have failed to break out of the iron cage.

Somebody needs to join up the dots.  Someone needs to follow, if not the money, at least the target numbers.