The difference between catching criminals and preventing crime? About 30 seconds 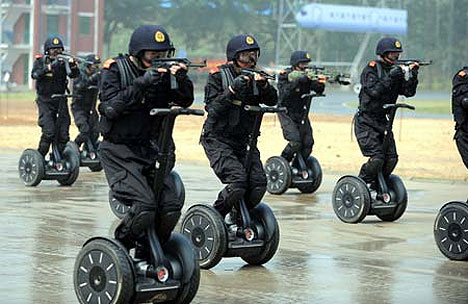 What is the difference between catching criminals and preventing crime, the distinction set out by the chief inspector of constabulary, Tom Winsor, today?

The reason I ask is that he didn't seem that sure himself. Prevention seemed to be about catching criminals with new technology and getting the public on board to help you. Yes, but...

The truth is that, when you look at it like this - apparently a mission to change everything just a little bit - the distinction between preventing crime and catching criminals is the 30 seconds or so between thinking about it and doing the deed.

I'm always a little sceptical when I hear that effectiveness is going to be enhanced by new technology. It isn't impossible. It is just that, in practice, it rarely is. Often it gets worse. In fact, the famous story of the beginnings of the concept of co-production in public services was about precisely this.

The great sociologist Elinor Ostrom was asked by the Chicago police in 1975 to help them find out why crime was rising.  Why was it that, when they took their police off the beat and into patrol cars – and gave them a whole range of hi-tech equipment that can help them cover a larger area more effectively – why then did the crime rate go up?

This isn’t just a question confined to the police.  It lies at the heart of why public services become less effective on the ground as they become less personal and more centralised.

Elinor Ostrom’s team decided that the reason was because that all-important link with the public was being broken.  When the police were in their cars, the public seemed to feel that their intelligence, support, and help were no longer needed.  She called this joint endeavour that lies at the heart of all professional work 'co-production' and technology can sometimes get in its way - because it makes frontline professionals forget the public altogether.

First, the target culture has been staggeringly wasteful of police resources.  If you don't believe me, read the extraordinary revelations of the police blogger Inspector Guilfoyle, who has blogged about precisely this, explaining absolutely correctly that:

"as you go down the levels of hierarchical organisations, the obsession with hard numerical targets intensifies. By the time you get to the front line, believe me, people DO pay A LOT of attention to the actual targets. The targets then become a focus for activity, driving behaviour and creating a culture of unhealthy internalised competition and individual blame."

Incidentally, a brilliant blog called Systems Thinking for Girls has set out quite clearly why targets lock in failure and it is seriously worth a read.

Second, part of the prevention issue for the police is what the systems thinker John Seddon calls 'failure demand'.  It is the failures of other public services, notably in mental health, that really waste police money.

Third, Winsor's rhetoric is absolutely right.  The future of policing is indeed prevention - it is the future of all public services - but it requires a completely different institution to make that possible, more outward-facing, dedicated to very local alliances in neighbourhoods, and street-by-street attention to detail, and to reaching out beyond the boundaries of police work.

And, above all, it means working with people - not just getting information from them via technological gizmos - but setting up the local institutions capable of knitting society back together around the police.

If we want to save our public service tradition - and we do - then prevention is the only way forward, the only way of generating the savings we need at the same time as turbo-charging the effectiveness of services.  But to make it work, our institutions will be completely different.
Posted by David Boyle at 07:29